Interested in stocks with huge growth potential? These three stocks hold promise for big gains in the years ahead.

Gilead Sciences (GILD 0.05%) has been a dream stock for long-term investors. The stock has gained more than 4,930% since the turn of the millennium, turning the company into a $130 billion biotech behemoth.

However, investors interested in Gilead's stock today are unlikely to see its shares go on another huge run like that, as the company's sheer size makes doubling again unlikely. That doesn't mean Gilead stock can't produce solid returns from here -- I wouldn't have bought shares if I didn't think it could -- but investors who want a stock that can deliver enormous share-price gains over the coming year need to focus their attention elsewhere.

Every biotech investor's dream is to find companies like Gilead before they go on their monster tear. Unfortunately, it often seems too late once a company hits your radar. Here, though, I've highlighted three companies that look to me like they are just getting started. Each company has more than doubled in value in 2015 and yet still has even more upside potential. Investors looking for turbocharged returns might want to give these companies a closer look -- it's not too late.

1. Intra-Cellular Therapies (ITCI 0.80%)
Intra-Cellular Therapies' shares gained a whopping 206% last year. Investors sent shares up 83% in a single day after the company released data on a late-stage clinical trial for its lead product candidate, ITI-007, which is being studied as a treatment for schizophrenia. The trial showed that patients who used ITI-007 showed a statistically significant improvement on their Positive and Negative Syndrome Scale total score, versus those who took a placebo. Importantly, ITI-007 also demonstrated placebo-like safety.

It's understandable why investors are so bullish on ITI-007 right now. If the compound proves to be an effective treatment for schizophrenia, then there's reason to believe it could work on other diseases of the central nervous system. Intra-Cellular Therapies is currently running trials using ITI-007 in other diseases such as depression, bipolar disorder, and dementia. Some analysts project peak sales of the drug as high as $6 billion worldwide.

Intra-Cellular is set to report results from a second phase 3 trial of ITI-007 in schizophrenia sometime in the middle of 2016. If that data also looks good, it wouldn't surprise me one bit to see investors take its shares to new heights.

2. Prothena Corporation (PRTA -0.56%)
Another company that successfully charmed the market in 2015 was Prothena Corporation. This Irish biotechnology company saw its shares skyrocket 234% during 2015, as investors got excited about the prospects for its early-stage clinical pipeline. 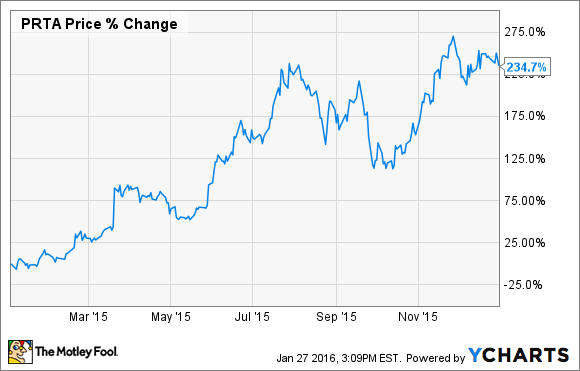 Shares got off to a good start when Prothena reported positive results from a phase 1 study of PRX-002, a compound it's studying alongside Roche as a potential treatment for Parkinson's disease. In phase 1 clinical trials, PRX-002 was shown to reduce levels of alpha synuclein (a protein in the brain that regulates dopamine and is associated with Parkinson's) by up to 96%. This clinical outcome suggests that PRX-002 could treat the root cause of Parkinson's disease, which, if true, would be an enormous breakthrough. Importantly, no significant adverse events were reported during the study.

While these results are extremely promising, it's important to remember that this data is only from a phase 1 study. Still, it's nice to know that the company has a well-financed partner in Roche by its side.

3. Exelixis (EXEL 3.12%)
Once left for dead, cancer-focused Exelixis came roaring back to life in 2015. Shares gained 241% over the course of the year, mainly due to two positive developments.

First, the company released impressive results from its METEOR study of advanced renal cell carcinoma drug candidate Cometriq. The drug demonstrated a 42% reduction in the rate of disease progression or death when compared with Afinitor, which is a widely used cancer treatment.

The second big new item came in November, when the FDA approved Cotellic to be used in combination with Zelboraf as a treatment for advanced melanoma. Studies showed that the Cotellic/Zelboraf combo improved patients' progression-free survival by 5.1 months versus those who took Zelboraf alone.

Exelixis initially discovered Cotellic and then handed it off to Roche's Genentech unit for additional development. If Cotellic proves to be a market success -- and I think it will, given its clinical results -- then Exelixis will receive a sizable portion of initial sales revenue during its launch.

With the upcoming catalysts of Cometriq's approval mixed with the likelihood of a strong cash infusion from Cotellic sales, investors in Exelixis have a lot to look forward to in 2016. Even after its strong run over the past year, its stock could be a winner from here, so more daring investors might want to put this company on their radar.