What: Shares of HollyFrontier (NYSE:HFC) and Holly Energy Partners (NYSE:HEP) declined 10% and 17%, respectively, in January, as industry headwinds for both refiners and master limited partnerships took their toll.

So what: As a refiner, HollyFrontier's business lives and dies by the crack spread. It's the most basic measurement between the price of crude oil and price of the refined petroleum products. In the second and third quarter of 2015, the crack spread in the Midwest was very strong and led to strong earnings results. Since that time, though, the crack spread has declined significantly. Scotia Howard Weil's weekly refining report notes that Midwest crack spreads have declined from their peak of $22.29 in the third quarter to $11.01 in 2016 to date. This will probably lead to much weaker earnings for HollyFrontier in the coming quarters. 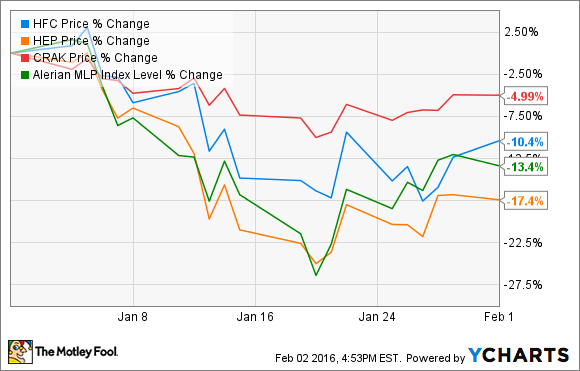 Holly Energy Partners hasn't fared much better, though. The Alerican MLP index declined 13% in January, so Holly Energy Partners was facing some strong headwinds in the month to begin with. A lot of the fear around master limited partnerships is that many of them are stretched rather thin financially by the recent decline in oil prices, and some are headed for some form of distribution cut. This may be dragging HEP's share price down, but the company itself isn't in that sort of trouble. It recently announced its 45th consecutive distirbution increase, and its cash flow in recent quarters has been more than enough to cover the increase.