The staffing company delivered on its guidance, but declared its customers were being a bit more cautious about hiring.

Given the volatility in equity markets and slowing growth in the global economy, investors had a right to be slightly fearful about staffing company Robert Half International's (RHI -0.33%) fourth-quarter results. In the end, the numbers were pretty much in line with guidance, although management declared that customers took a more cautious tone at the end of the year.

Let's take a closer look at the earnings and what management had to say about trends in its business.

Robert Half International: The raw numbers
No one wants to be holding a stock when management is expanding headcount in order to capture growth that suddenly dissipates when the economy turns downward. That's the scenario  Robert Half investors were faced with in 2015, as it expanded its number of full-time employees by 14% to 12,800. Its selling, general and administrative costs, or SG&A, increased to 32.5% of revenue in the fourth quarter, compared to 32% in the same period last year.

However, revenue and gross margin also increased enough to more than make up for the increased SG&A costs. Net service revenue rose 6.8% to $1.305 billion in the fourth quarter, slightly below the midpoint of its $1.285 billion to $1.335 billion guidance range. Meanwhile gross margin increased 7.9%, with SG&A up 7.7%.

What happened with Robert Half's fourth quarter
In truth, Robert Half's prospects are always going to be tied to labor market trends, which in turn depend on the state of the economy and companies' willingness to hire. As a consequence, analysts usually ask management about two things:

The second point is important because in typical recoveries, permanent hiring tends to significantly outpace temporary hiring as more permanent jobs are lost in the recession -- so it follows that these jobs should come back during a recovery phase.

Regarding the first issue, CFO Keith Waddell said the following on the earnings call:

Turning to the second subject, Waddell discussed the sluggishness of the recovery since 2009: "Perm has also outgrown temp every year and this cycle as well. So that's not unusual. The degrees or something, I guess we could have a discussion about"

Putting these two points together, it's clear that some uncertainty on the economy slipped into Robert Half's customers' thinking in the fourth quarter, and a look at ongoing permanent versus temporary revenue growth rates reveals a closing of the gap in growth in the U.S. Meanwhile, international's temporary placement growth was actually stronger than permanent growth in the fourth quarter. 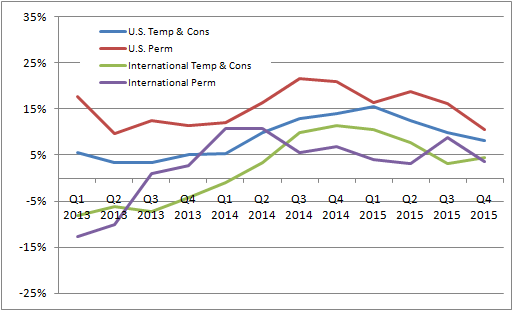 Looking ahead
All told, the company basically hit its guidance for Q4, but it's the future that counts. Management's prediction for the first quarter is for revenue of $1.27 billion to $1.33 billion, implying growth of 8% at the midpoint, while adjusted EPS guidance of $0.61 to $0.67 implies an increase of 10% at the midpoint.

Lee Samaha has no position in any stocks mentioned. The Motley Fool recommends Robert Half International. We Fools may not all hold the same opinions, but we all believe that considering a diverse range of insights makes us better investors. The Motley Fool has a disclosure policy.