There was a lot to like in the social media leader's report, but a couple of items stood out from the rest for their longer-term relevance.

Considering Facebook's (META -0.70%) nearly 16% jump in share since it announced fourth quarter and 2015 earnings on Jan. 27, it's safe to say investors were duly impressed with the manner in which the social network ended its year. And why not? Q4 revenue jumped more than 50% compared to the year-ago quarter, income from operations did the same, and net income more than doubled on a GAAP basis (including one-time expenses). Not a bad way to finish the year.

Not to be outdone, Facebook's digital ad nemesis, Alphabet (GOOG -0.05%) (GOOGL -0.05%), also blew the financial doors off 2015, reporting an 18% pop in revenue year-over-year to an industry-leading $21.33 billion. It's a good time to be a digital advertising giant, and assuming pundits' expectations for 2016 come to fruition, investors can expect another banner year for both Facebook and Alphabet.

But as impressive as their 2015 was, a couple of specifics stand out as indications that last year was just a precursor of things to come.

What really matters
Facebook's $5.84 billion in total Q4 revenue -- $5.64 billion of which came from advertising -- and nearly $18 billion revenue for the year were impressive. But looking ahead, it is Facebook's ridiculously high user engagement, particularly among mobile users, that stands out. Going forward, it will be Facebook's (and Alphabet's) success in transitioning to a mobile world that will continue to drive record-breaking financial results.

Nearly half the world's connected individuals access their respective Facebook accounts each month. Despite its enormous size, Facebook was still able to boost its monthly average users (MAUs) to 1.59 billion. At last count there were about 3.2 billion Internet users worldwide, which makes Facebook's MAU tally even more remarkable. And it gets better.

Of all those MAUs, over 1 billion access their Facebook account every day. Long-time Facebook fans might recall it wasn't long ago that user saturation concerns were commonplace. Another "issue" the concerned some pundits was Facebook's lack of a mobile identity, not to mention its lack of a mobile strategy. Those points, too, have been more than adequately addressed, CEO Mark Zuckerberg's shift in emphasis to all things mobile was what really dazzled in 2015. 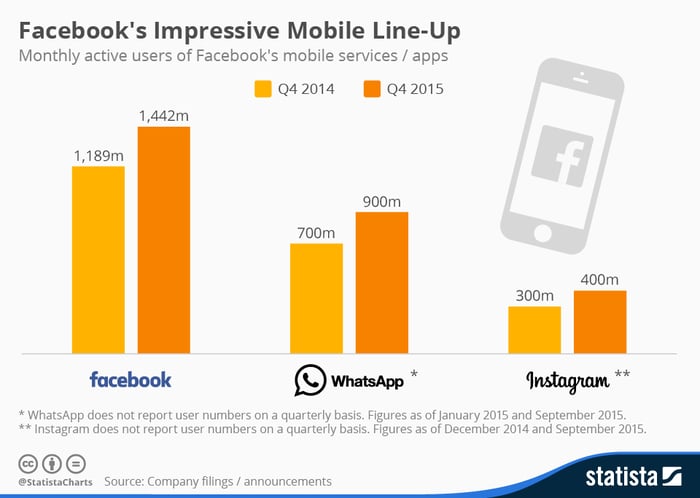 Last year, Facebook boosted its mobile MAUs to a whopping 1.44 billion, a 21% improvement. Of all those Facebook "friends" on the go, 934 million of them use their mobile devices to log into Facebook daily. And most importantly, all those smartphone and tablet users are boosting Facebook's top and bottom lines.

In the fourth quarter, approximately 80% of Facebook's $5.64 billion in ad sales came from mobile spots. That compares to 69% in Q4 2014. And based on Facebook's outstanding engagement levels as measured by its daily users, mobile and otherwise, investors can expect more of the same in the foreseeable future.

Why it matters
Alphabet's stock price jump following its own fourth-quarter and full-year financial results was largely due to the numbers from its wildly popular YouTube property and its strong mobile search results, according to CFO Ruth Porat. Similar to Facebook a couple of years ago, Alphabet's share price was under some pressure due to its mediocre mobile results. The reason Facebook and Alphabet have put so much emphasis on mobile is because it's the fastest-growing piece of the digital advertising pie.

It's expected that we'll see a few firsts over the next couple of years related to digital advertising in general, and mobile in particular. A recent study suggests that 2017 will be the first year that digital ad spend will outpace that for TV, and the gap is expected to widen in the ensuing years.

Mobile spots will also reach a couple of milestones. Mobile ad spend is predicted to top $100 billion in 2016, which will be a first, and is expected to account for more than half of the global digital market -- also a milestone. Facebook is perfectly positioned to dominate the world of mobile advertising, and with the undeniable trend toward smartphone and tablet usage in full swing, things will only get better for shareholders.

Suzanne Frey, an executive at Alphabet, is a member of The Motley Fool's board of directors. Tim Brugger has no position in any stocks mentioned. The Motley Fool owns shares of and recommends Alphabet (A shares), Alphabet (C shares), and Facebook. Try any of our Foolish newsletter services free for 30 days. We Fools may not all hold the same opinions, but we all believe that considering a diverse range of insights makes us better investors. The Motley Fool has a disclosure policy.