What: According to data provided by S&P Capital IQ, the clinical-stage cancer immunotherapy company Juno Therapeutics (NASDAQ:JUNO) shed 10% of its value on moderately high volume yesterday. Juno's shares are now trading at 52-week lows and are currently down a staggering 44% since the start of 2016: 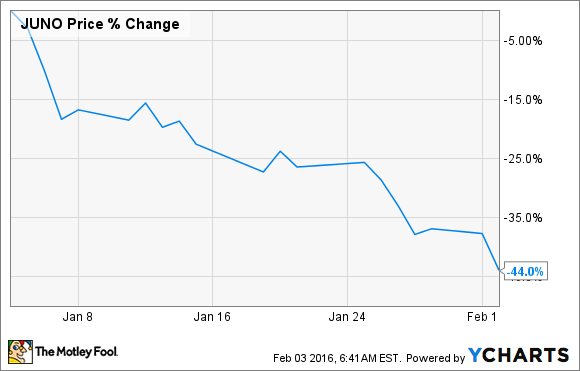 So what: The good news is that this latest downward move wasn't the result a specific negative catalyst. In fact, Juno appears to be caught in the middle of a major revaluation trend among all clinical-stage biotechs -- especially those developing so-called chimeric antigen receptor (CAR) T cells for the treatment of blood-based malignancies and solid tumors. After all, Juno's closest competitor in the CAR T space, Kite Pharma (NASDAQ: KITE), hasn't fared much better so far this year: 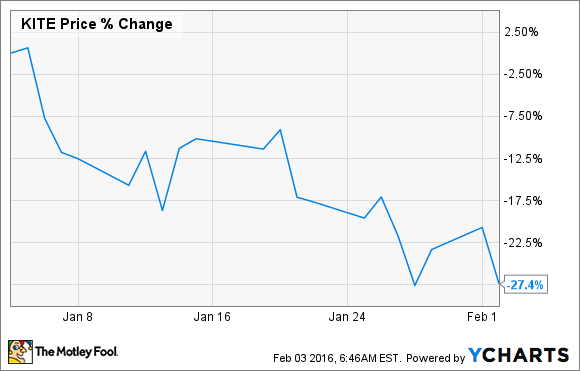 Why are CAR T developers getting walloped this year? Although both Juno and Kite reported fairly impressive results for their lead product candidates at last year's American Society of Hematology meeting, several question marks still surround the safety of this technology in general. Juno, for instance, reported that a handful of patients being treated with its experimental therapies JCAR015 and JCAR014 experienced bouts of cytokine release syndrome and/or neurotoxicity.

Now what: The bottom line is that the market now seems convinced that Juno and Kite will probably run into serious trouble with their modified T cell platforms because of these outstanding safety concerns. After all, Juno's valuation has fallen to a mere 2.1 times its last reported cash position . That's alarmingly low for a biotech with multiple therapies in development that are thought to have blockbuster potential.

Despite Juno's significant drop this year, investors may want to remain cautious with this speculative biotech for the moment, given that there's no good way of telling if the stock is finally close to finding a bottom.