2015 was hardly a banner year for Deere & Company (NYSE:DE). The company's stock dropped 14% and operations took a hard turn south as the global economy started to slow and the dollar strengthened.

As we look forward to 2016, is Deere headed for its worst year yet?

Momentum is heading lower
You can see below that revenue and earnings are both trending significantly lower right now and it's a trend that shows no signs of abating. 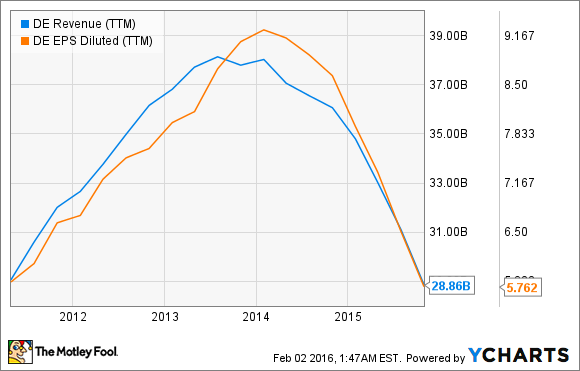 Agriculture prices are have pulled back, mineral prices are down, and the energy market is currently in shambles. To make matters worse, the dollar continues to get stronger, making any international sales look weaker when compared to a year ago.

The agriculture business is what John Deere is known for but what's hurting business right now is weakness in demand for products like dump trucks, backhoes, excavators, and skid steers. These are in demand from construction and mining industries across the world. And as those two sectors struggle, I don't see demand being strong for Deere in 2016.

International weakness will sting
In the fiscal fourth quarter, currency alone took a 5% bite out of revenue, a headwind that shows no sign of slowing down. 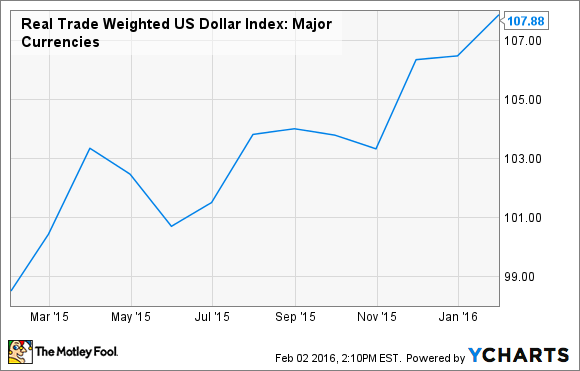 Now, not only does Deere have to deal with weak demand in construction and mining in international markets, but also with products exported from the U.S. suddenly more expensive to customers. This could reduce sales or margins if prices are kept constant in local currencies. Worse yet, both could happen, which seemed likely in Q4 2015 as worldwide construction and forestry sales fell 32% but operating profit dropped 72%.

No signs of recovery... yet
With all of these headwinds and more uncertainty in China than we've seen in years, I think it's going to be a rough year for Deere. The company has taken efforts to cut costs and shares are trading within shouting distance of a 52-week low, so expectations aren't high. But even for a major industrial supplier, I don't see any reason to be excited about this stock in 2016, even if it isn't the company's absolute worst year yet.

Will 2016 Be Deere & Company's Worst Year Yet? @themotleyfool #stocks $DE Next Article
Current