Please ensure Javascript is enabled for purposes of website accessibility
Log In Help Join The Motley Fool
Free Article Join Over 1 Million Premium Members And Get More In-Depth Stock Guidance and Research
By Matthew DiLallo - Feb 4, 2016 at 9:45AM

Counterparty risk concerns have rocked rival Williams Companies, but that isn’t something that keeps Kinder Morgan up at night.

Most investors don't pay much attention to a company's counterparty risk, which is the risk of a customer defaulting on its contracts...until there's a reason to worry about that risk, such as when credit is tightening because business conditions are deteriorating.

That's exactly what's happening in the energy sector right now, which is why investors have started to grow more concerned about the counterparty risk of midstream companies, including Kinder Morgan (KMI 0.54%). It's a risk, however, that investors don't need to lose any sleep over.

Drilling down into Kinder Morgan's counterparties
On Kinder Morgan's fourth-quarter conference call, CEO Steve Kean spent some time dealing with the market's concern surrounding the company's counterparty risk. One reason for this concern was because its terminal segment's earnings in the fourth quarter fell 7% year over year to $257 million after the bankruptcies of two key coal customers affected earnings by $45 million. That said, despite this impact, as well as the impact from weak commodity prices, distributable cash flow was $1.23 billion, which was only down slightly from last year's total of $1.27 billon.

Still, given the concerns, Kean detailed the company's counterparty risk by saying,

We continue to monitor closely our counterparty credit risk as we always have. Fortunately, we are a large and very diverse company with operations across our number of sectors and across the spectrum within those sectors. We have a large customer base with only about 20 customers accounting for more than 1% of our annual revenues and the great majority of our customers remain solidly investment grade. The largest of those 20 customers is about 5% of our revenue and that customer is rated AA-. We estimate that our top 25 customers constitute about 44% of our revenue and just over 80% of the revenue from that top 25 is coming from investment grade rated entities.

Kean points out that Kinder Morgan has a very diversified customer base, with its top customers having very strong credit ratings, which are further detailed on the chart in the below slide. 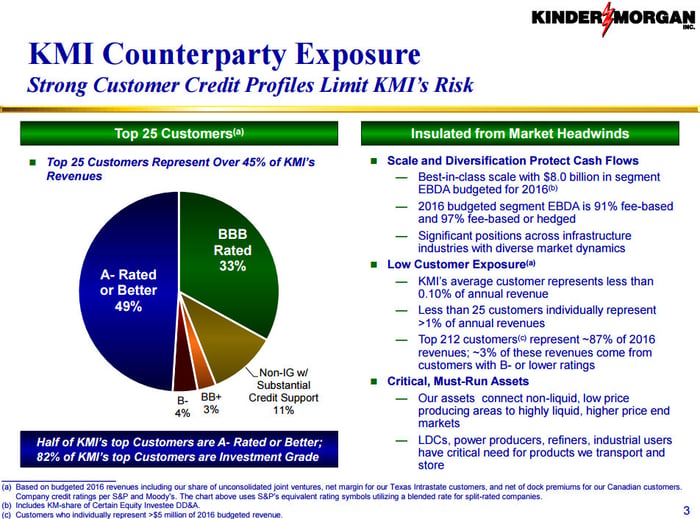 What this suggests is that is the risk of any of these companies defaulting on their contracts with the company is minimal because of the overall strength of their credit ratings. Furthermore, given that the largest of the company's customers, which constitutes about 5% of its revenue, has a very strong AA- credit rating, it's very unlikely that a key customer bankruptcy will have an outsized impact on the company's financials going forward. In fact, just 3% of the company's revenue comes from customers with weak B- or lower credit ratings.

When counterparty risks are real
This is in stark contrast to some of its other midstream peers. Williams Companies (WMB 0.65%) and its MLP Williams Partners (NYSE: WPZ), for example, receive 20% of their gathering and processing revenue from just one customer. Worse yet, that customer is Chesapeake Energy (CHKA.Q). That's a problem because Chesapeake is financially stressed right now as evidenced by its credit rating of CCC+ (well below investment grade) because its rating agency views its debt as being "unsustainable" at current commodity prices.

Chesapeake Energy's financial stress is one reason why it recently renegotiated two of its gathering agreements with Williams Companies and Williams Partners to switch both to fee-based agreements. That lowered Chesapeake Energy's near-term gathering costs in order to improve its economics in two key shale plays. Williams Companies and Williams Partners were expected to benefit from this agreement because Chesapeake Energy would be in a stronger position to grow its volumes in those two areas. However, if it were to go bankrupt then it would unlikely be able to uphold its end of that bargain and grow production.

Having said all that, a similar credit rating downgrade based on counterparty risk isn't a risk that Kinder Morgan has to worry about. That's because unlike Williams, it has strong customer diversification, with few customers with credit ratings as low as Chesapeake.

Investor takeaway
With the turmoil in the energy industry beginning to grow, it's causing investors to worry about counterparty risk. However, that's a bigger concern for companies like Williams Companies that have one key customer that's in distress. In fact, as Kinder Morgan proved last quarter, even if its weaker customers go belly up, the impact on its results are pretty minimal.