Please ensure Javascript is enabled for purposes of website accessibility
Log In Help Join The Motley Fool
Free Article Join Over 1 Million Premium Members And Get More In-Depth Stock Guidance and Research
By Andrew Tonner - Feb 4, 2016 at 9:45AM

Is there a better example of a tech company clicking on all cylinders than social-media kingpin Facebook (META -0.76%)?

Riding high in the wake of a rock-star earnings report, Facebook is seeing its shares again pushing new all-time highs. 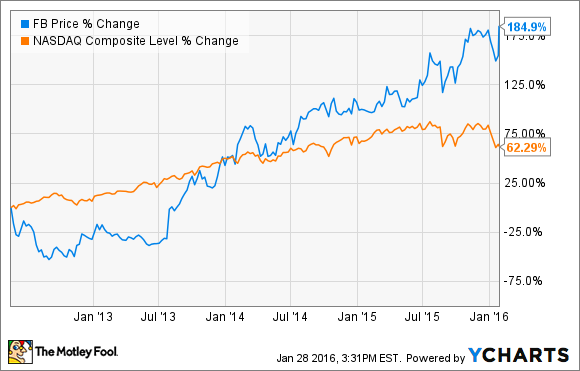 The company and its impressive portfolio of billion-dollar subsidiaries are executing on their respective business models with more success than many companies in recent memory. A lot of their moves involve positioning Facebook for continued long-term success, and the recent decision to make WhatsApp completely free for users is the latest evidence of the company's winning strategy.

WhatsApp drops subscription fees
According to a post on its corporate blog earlier this month, WhatsApp announced its plans to drop all subscription fees for its users, making the service that caters to nearly 1 billion users worldwide totally free of charge.

Facebook-owned WhatsApp historically charged users nothing for the first year of using the service, after which use of the platform cost $0.99 annually. That might sound like a pittance, but as WhatsApp noted in its blog post, not all users of the WhatsApp service even have debit or credit cards, raising the specter that families could lose the ability to communicate simply because someone couldn't afford a one-dollar charge. So while WhatsApp's business strategy has shifted, it doesn't mean Facebook has shuttered its plans to monetize the service.

Following in Messenger's footsteps
In its blog post, WhatsApp hinted at its emerging monetization strategy, saying, "Starting this year, we will test tools that allow you to use WhatsApp to communicate with businesses and organizations that you want to hear from." That sounds eerily familiar to Facebook's strategy to monetize its other popular messaging service, Messenger.

As we also learned earlier this month, Facebook has layered over 700 apps into Messenger, enabling users to, among other things, hail a ride with Uber or engage with a business' customer service entirely within Messenger. Using this strategy, Messenger and WhatsApp can either charge businesses a percentage of their transaction revenue or a fee for allowing third-party companies access to the Messenger or WhatsApp platforms. In addition, though WhatsApp claimed it won't begin showing users ads to support the service, recent commentary from Facebook CEO Mark Zuckerberg hints at ads as an eventuality.

Eventual ads?
On Facebook's recent conference call, Zuck likened his vision for WhatsApp's and Messenger's business models to Facebook's own methodical evolution toward ads years ago. The Facebook co-founder explained how, rather than simply inserting banner ads some users might find annoying, the company created Pages as a way to bring more companies on to the platform. From there, Facebook layered analytics and eventually ads that created a more organic value proposition for Facebook's users and the companies hoping to market to them -- a gradual tactic he believes could also work well with Messenger and WhatsApp.

With roughly 1.6 billion users between them, WhatsApp and Messenger effectively equal Facebook's 1.59 billion monthly active users. Some analysts argue that thanks to its extreme popularity, WhatsApp alone could eventually be worth over $100 billion to Facebook shareholders. Even if that proves wildly inaccurate, Facebook's savvy management and execution of its own monetization strategy, which yielded just under $18 billion in sales in 2015, should instill confidence that for WhatsApp to drop its long-standing subscription model is indeed only one small step in its pivot toward longtime profitability in the years to come.