Please ensure Javascript is enabled for purposes of website accessibility
Log In Help Join The Motley Fool
Free Article Join Over 1 Million Premium Members And Get More In-Depth Stock Guidance and Research
By Andrew Tonner - Feb 4, 2016 at 10:39AM

While the record-setting performance from the Apple Watch pales in comparison to the iPhone and iPad, the growth story for Apple's latest device matters more than most investors realize. 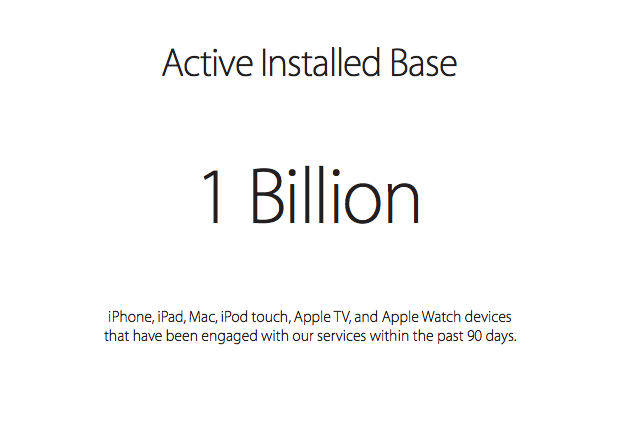 Just how "bad" things are at tech giant Apple (AAPL 1.33%) is in many respects an exercise in relative thinking.

Despite posting the most profitable quarter ever for any company, Apple saw its shares tank after its earnings report late last month amid renewed concerns over sluggish growth, especially in its all-important iPhone segment. But Apple's report also contained a number of equally significant story lines, especially concerning Apple's important "other products" segment, which contains Apple TV and the Apple Watch.

As the dust settles from its "disappointing" earnings release, what can we tell about how the Apple Watch performed?

Apple Watch and Apple TV surge
Only Apple's management team knows for sure just how well the Apple Watch performed during its fiscal Q1. However, evidence suggests that the Apple Watch enjoyed another record-setting performance during the quarter.

Apple Watch financial data is consolidated into Apple's smallest reporting segment -- other products -- which also includes the Apple TV, iPod, and Beats Electronics hardware. For the quarter, Apple's "other" segment enjoyed by far the most impressive growth of any of its reporting segments.

In all likelihood, this impressive growth stemmed from sharp increases in Apple Watch and Apple TV sales, for a few reasons. Though we don't necessarily have a great sense about Beats' growth profile, we do know that the iPod remains in a cyclical decline thanks to the iPhone. What's more, CEO Tim Cook said the Apple Watch set a new quarterly record in its Q1, with holiday sales driving especially strong sales in December. All told, Apple Watch distribution has now extended to over 12,000 retail locations across 48 countries.

Here's an estimate from one of the analysts I respect the most -- the notoriously data-driven Horace Dediu of Asymco, who tweeted:

My estimate on Watch sales is about 5.5 million units during Q4. 12.4 million to date.

So while we can't say for sure, all signs suggest that the Apple Watch indeed was a standout performer during Apple's recent report, a fact that matters more than many Apple investors may realize.

A bridge to Project Titan
The Apple Watch will never drive the kind of revenue volume the iPhone will. However, with iPhone sales growth largely driven by its multiyear product cycle and distribution growth, non-core product lines such as the Apple Watch should provide much-needed organic growth for Apple until its next massive revenue opportunity, the automotive Project Titan, reaches the market near the turn of the decade.

According to research firm IDC, Apple Watch should grow from its 2015 estimates of 13 million units sold to an impressive 45.2 million in 2019, roughly 43% average annual growth. Assuming a simple average selling price of $500, this would yield a hypothetical $22.6 billion in organic revenue growth for Apple in the year when Apple is reportedly planning to launch its Project Titan automotive project.

Especially given the anemic outlook for core Apple products such as the iPhone and, especially, the iPad, Apple Watch growth could prove a useful tool in buoying its financial performance as more significant potential growth drivers prepare to come online.

The opportunity for Apple to capture a meaningful share of the global automotive market remains by far its best chance of creating a product with the financial clout to rival the iPhone. So although Apple Watch's impressive performance in the company's most recent quarter pales in comparison with its larger divisions, the device should remain an important source of much-needed growth for the world's largest and most profitable company in the years ahead.