Verizon is reportedly considering a name change for at least some of the AOL services it acquired last year. It may already be overdue.

It's been seven months since Verizon (VZ 0.95%) scooped up AOL in a $4.4 billion deal, and the country's leading wireless provider is reportedly considering a name change for at least some of the businesses it scooped up.

There are several good reasons it should.

In acquiring AOL, Verizon got an assortment of growing online businesses, some of which it eyed as important pieces in developing revenue streams that can offset its shrinking wireline revenue and slowing overall growth. AOL's video and display ad platforms should fit that bill, as should AOL's recently acquired mobile ad specialist, Millennial Media.

Other parts of the AOL business, however, date back to the early days of the consumer Web, when America Online was a top dog.

Dialup Internet service, for example, still generated $606 million in revenue for AOL in 2014, its last full year of operation before Verizon acquired it. That made up 24% of the company's overall top line.

And for better or worse, those businesses still come to mind when we hear the AOL name. (OK, it's definitely for the worse.)

"If you ask me today, I could say, 'I feel very strongly about the AOL brand. It has a lot of legacy and meaning, and we shouldn't move away from it!'" Kline told BI. "But if we met tomorrow, I could be like, 'Yes! We need a new name!' It's a very hard needle to thread for us."

AOL today owns a number of popular Web publications, such as Huffington Post, TechCruch, and Engadget.

But what really drew the interest of Verizon last year is what Fortune called "a sophisticated suite of advertising technologies for online and traditional media that no other company (aside from Google and Facebook) can match."

There are five important words in that quote we'll return to in a moment. 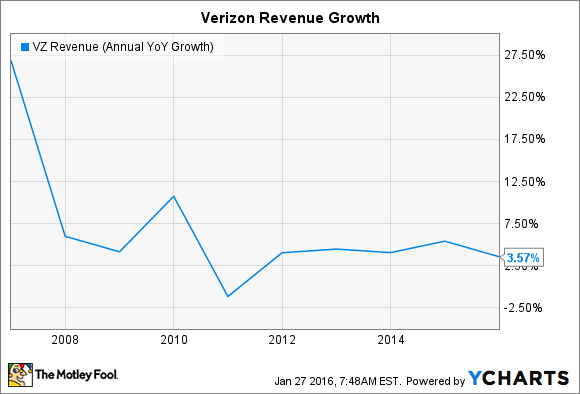 AOL became one of the early leaders in video advertising, and it has components that are well suited to bolster Verizon's new mobile-first video service, Go90. Its AOL On platform boasted some 6.8 million videos watched per day, on average, in 2014. That compares to the estimated 7 billion daily video views on Alphabet's YouTube, whose name has become synonymous with online video.

AOL was also boasting impressive growth from its video platform, with views up 42% over the prior year. While it's not measuring apples to apples, YouTube was reporting 60% annual growth in the amount of time its users spent watching video on the platform.

That brings us back to those five key words from the quote above:

AOL is positioned in third place in an important area for future growth. But it's also trailing two ad-tech heavyweights that look poised to continue dominating digital advertising for the foreseeable future.

Those two companies devour more than half of the entire digital video ad market today, according to eMarketer. And while the research firm sees that market growing by more than 50% between 2014 and 2017, it doesn't see any company making significant inroads into the Google/Facebook dominance.

Its forecast for AOL, made after the acquisition of the mobile-first ad-solutions company Millennial Media: a loss of market share, from some 2.1% in 2014 to 1.9% in 2017.

In the history books
The AOL name reeks of antiquation. It reminds us of an Internet era that now seems like an eternity ago. Some commentators, including one in that Business Insider piece, have noted that AOL may still conjure up memories of the infamous failed merger between AOL and Time Warner. But that's now so far in the rear view, it's tough to remember why it was such a big deal at the time.

How long ago was it? Mark Zuckerberg, the billionaire founder of a business that does $17 billion in revenue, had yet to celebrate his sweet 16th birthday. Snapchat founder Evan Spiegel had yet to turn 10.

Perhaps more telling about AOL's position in today's digital world may be this career advice from venture capitalist Marc Cenedela: "If you're still using AOL [email] to represent yourself professionally, it could be sending a signal that you're uncomfortable with new technology and that you haven't prioritized keeping your skills up to date."

If that's the signal AOL email is sending, it's not too far a reach that its other products bear a similar stigma. A carefully executed name change could make a difference with prospective business partners.