Please ensure Javascript is enabled for purposes of website accessibility
Log In Help Join The Motley Fool
Free Article Join Over 1 Million Premium Members And Get More In-Depth Stock Guidance and Research
By Daniel B. Kline - Feb 4, 2016 at 10:45AM

The company has a looming legal problem that added to general uncertainty about the industry in which it operates.

The company was on a mostly downward path for the entire month, opening at $56.11 on Jan. 4 -- down from its end-of-2015 close -- and finishing at $48.27 at the close of the last trading session for the month, a nearly 14% drop, according to S&P Capital IQ data. Some of the loss can be attributed to continued investor concerns about its 2015 numbers, but the biggest drops came after it was made public that the company faced $23 billion in potential fines for alleged violations of the Telephone Consumer Protection Act. 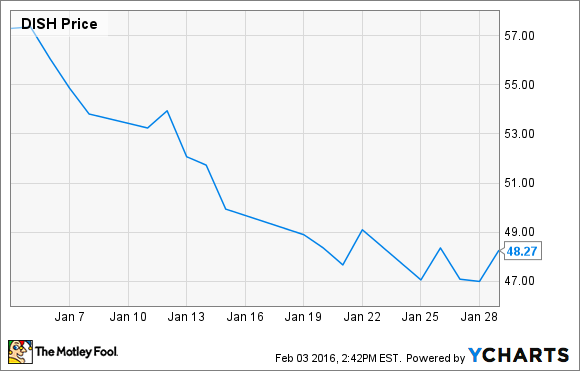 What: The Department of Justice (DOJ), along with the states of Ohio, Illinois, California, and North Carolina, are seeking $900 million in civil penalties, and $23.5 billion in fines from DISH for violating the federal Do Not Call Registry, according to the Denver Post. They're going after the money -- which is more than DISH's market cap -- because a judge ruled that DISH and contractors working on its behalf made more than 55 million illegal telemarketing calls using recorded messages and phoning people on do-not-call lists.

So what: The DOJ and the four states still fighting DISH have set their sights awfully high given that the satellite television company has already settled with the 46 other states regarding the telemarketing calls, paying just less than $6 million all together, ARS Technica reported. DISH isn't really arguing its innocence; it's simply pointing out that the numbers being asked for are much higher than previous cases.

The satellite pay-television providers filed a motion in U.S. District Court calling the proposed penalty "a shocking amount far in excess of any penalties that the federal government has sought or obtained from any other entity for telemarketing violations, and for which the United States provides no factual support."

Now what: Ultimately, a settlement will be worked out, removing a large, dark cloud that's been hovering over DISH. Even though that will almost certainly happen, and the deal will be in the low millions and nowhere near the $23.5 billion being asked for, the company's stock may continue to suffer as long as the case is outstanding.

These are long-ago violations, and the company has made major changes to ensure nothing similar happens again. This is likely a one-time scenario; but coupled with the problems facing the pay-television market, in general, it was enough to drag DISH's stock down in January.