The market was unimpressed by Fitbit's new Blaze. 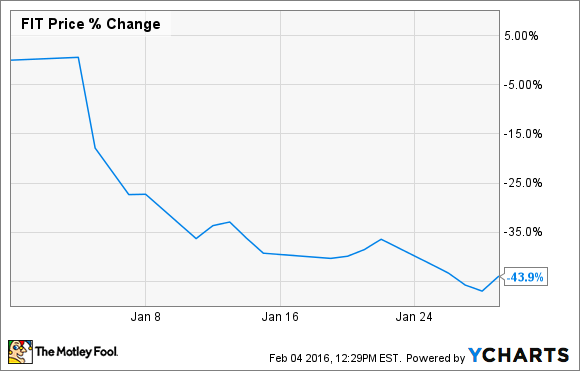 What: Like the rest of the market, Fitbit (FIT) started off the year in the dumps -- except the maker of fitness trackers took it far worse than the broader market, losing 44% of its value, according to Capital IQ data. It all started at the Consumer Electronics Show in Las Vegas.

So what: Fitbit announced its new Blaze smartwatch at CES last month, and the overall investor reception was not good. Shares fell 18% on that day on concerns that the new device wouldn't hold its own against the coming onslaught of competing smartwatches. Speaking of competition, sports apparel maker Under Armour (UAA -1.93%) announced a handful of new wearable activity trackers on the same day, including a wearable band that starts at $180. The market is definitely heating up.

Now what: The company followed up the Blaze by announcing another product just yesterday, the new Alta fitness wristband that focuses heavily on user customization and fashion. That device does look more promising than the Blaze, and analysts seem to be a bit more bullish on Fitbit's product cycles now. While investors seem to be overly cautious in regards to high-multiple, freshly public hardware makers right now, at least two Street analysts are still bullish that the wearables market is not simply a fad.

Evan Niu, CFA has no position in any stocks mentioned. The Motley Fool owns shares of and recommends Under Armour. Try any of our Foolish newsletter services free for 30 days. We Fools may not all hold the same opinions, but we all believe that considering a diverse range of insights makes us better investors. The Motley Fool has a disclosure policy.