Please ensure Javascript is enabled for purposes of website accessibility
Log In Help Join The Motley Fool
Free Article Join Over 1 Million Premium Members And Get More In-Depth Stock Guidance and Research
By George Budwell - Feb 4, 2016 at 11:15AM

A shake-up in leadership sent the stock reeling.

What: Shares of the regenerative-medicine company Osiris Therapeutics (NASDAQ: OSIR) fell by as much as 16% in early trading Thursday on modest volume after the company announced a major shake-up in its leadership team. Specifically, Dwayne Montgomery is taking over as interim CEO and Frank Czworka will become the company's new chief operating officer. This change in leadership was triggered by the resignation of the company's CEO Lode Debrabandere for "personal reasons."

So what: This change in leadership comes at an unfortunate time for the company. After all, Osiris is facing a class action lawsuit for allegedly overstating revenue and failing to follow GAAP standards in its quarterly financial reports. So, Debrabandere's sudden departure doesn't exactly inspire confidence in the company's ability to come out of this accounting mess unscathed.

Now what: Osiris has struggled to shake off these allegations of accounting irregularities after its auditor BDO USA resigned last December. In fact, the company's shares are now down by over 40% in 2016, according to data compiled from S&P Capital IQ: 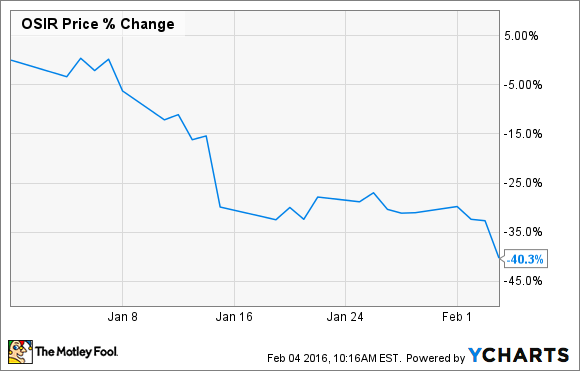 So, despite having a distribution agreement in place with the reputable Stryker Corporation for its bone allograft product Bio4, Osiris may still have further to fall because the sentiment surrounding this stock is simply so toxic right now. That's why I won't be picking up any shares in this struggling biotech -- even after this steep decline in share price.