Please ensure Javascript is enabled for purposes of website accessibility
Log In Help Join The Motley Fool
Free Article Join Over 1 Million Premium Members And Get More In-Depth Stock Guidance and Research
By Tyler Crowe - Feb 4, 2016 at 8:55AM

Enterprise Products Partners' 2015 was nothing to write home about in terms of stock performance, but the underlying financial performance of the company suggests that 2016 could be a banner year.

From a stock performance perspective, 2015 was one of Enterprise Products Partners' (EPD -0.08%) worst years since it went public. On a total return basis -- price appreciation and dividends -- shares of Enterprise declined by 27%, just a few percentage points shy of the decline we saw during the financial crisis. Yet if you were to look at the company's operational and financial performance for the year, you might be hard pressed to see why shares declined the way they did.

Looking ahead to 2016, though, there are reasons to think that things could get much better for the company. Let's look at why the company has been able to do well despite the industrywide decline and why this suggests that Enterprise could follow up one of its worst years on record with one of its best. 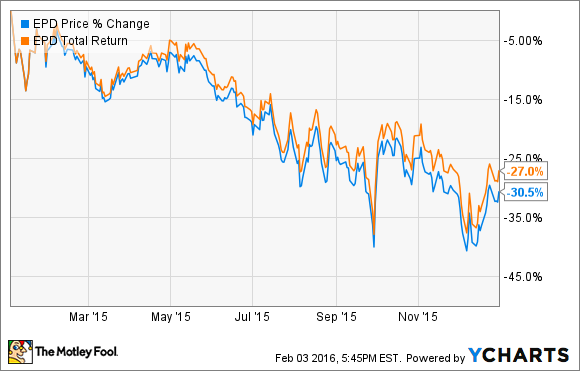 Stable base
Any company that works in the oil and gas industry, no matter what part of it, will be affected in one way or another. Enterprise certainly hasn't been completely immune, but it has done a pretty impressive job of insulating itself from the effects that many others have faced. The company saw some modest declines in pipeline volumes across its system, and in its few business segments that are exposed to commodity prices we saw a slight decline in margins. Overall, though, other components of the business and new assets brought online in the year were able to offset this weakness such that the company's gross operating margin -- the best indicator of Enterprise's top line -- grew a modest 1%.

At the same time, Enterprise was able to keep its costs in check such that other costs didn't eat up that modest growth. Net income for 2015 declined 9.7% mostly because of non-cash expenses such as depreciation and impairments. On a cash basis, Enterprise saw distributable cash flow grow to $5.6 billion from $4.1 billion in 2014. Even if we were to strip out gains from asset sales in these two years, distributable cash flow grew by 5% and resulted in a distribution coverage ratio of 1.3, leaving plenty of room for future distribution growth in 2016 and reinvest in growth for further down the road.

Looking at numbers like that, it's kind of hard to see why shares took the beating they did in 2016.

Plenty of growth in the pipe
It's awfully handy that Enterprise's cash flows are so stable even during this giant fall in commodity prices, but there is a downside: Enterprise probably won't reap huge rewards when oil and gas prices rise. So the only true way that the company can grow its cash flows is to maintain a steady pace of projects coming online. Luckily for investors, 2016 will be a pretty big year for having new assets come online. 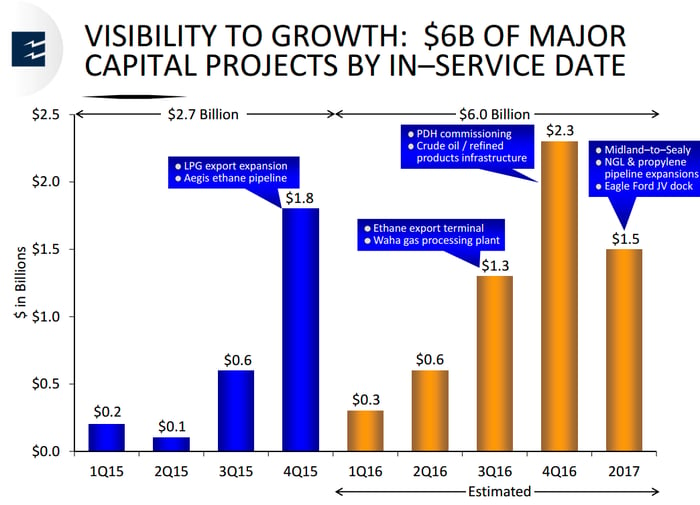 Of the $6 billion in projects currently under construction, $4.5 billion of them will be completed and brought online. The largest of these projects is Enterprise's propane dehydrogenation facility in the Gulf Coast. It will manufacture about 1.65 billion pounds of polymer-grade propylene annually that can be used as a major feedstock for chemicals and manufacturing. What's even better is that this facility's entire production capacity is 100% contracted under fixed fees for an average of 15 years.

Another thing to consider is that the two major projects that came online last quarter -- its liquid petroleum gas export facility expansion and the Aegis pipeline -- weren't fully completed until Dec. 30. So we have yet to fully realize the benefits of these two assets in the company's current earnings.

With such a large bump in assets coming online, chances are we can expect cash flows to get a nice boost in 2016 that should lead to continued distribution growth.

What a Fool believes
By all metrics of the company's operations, 2016 should have been a great year for Enterprise Products Partners. It grew operating profits and cash flows in the face of a massive decline in oil and gas prices, and still has been able to retain large swaths of that cash to reinvest in its projects under construction. Unfortunately, Mr. Market can sometimes move in mysterious ways, and it led to Enterprise's units having one of its worst years ever.

Eventually, investors will get wise to the fact that Enterprise continues to deliver solid performances during this energy market lull, and when they do so they'll find a stock that trades at a distribution yield of 6.6%. Those kind of numbers suggest that 2016 might end up being one of Enterprise Products Partners' best years yet.

Tyler Crowe owns shares of Enterprise Products Partners.  You can follow him at Fool.com or on Twitter @TylerCroweFool.

The Motley Fool recommends Enterprise Products Partners. Try any of our Foolish newsletter services free for 30 days. We Fools may not all hold the same opinions, but we all believe that considering a diverse range of insights makes us better investors. The Motley Fool has a disclosure policy.