Please ensure Javascript is enabled for purposes of website accessibility
Log In Help Join The Motley Fool
Free Article Join Over 1 Million Premium Members And Get More In-Depth Stock Guidance and Research
By Daniel Sparks - Feb 5, 2016 at 10:30AM

The co-founder will have to answer some critical questions next week. And the stock's sharp decline in recent months means the stakes are high.

Next week, Twitter (TWTR 0.78%) will report fourth-quarter results and host a live conference call with analysts. Going into the report, the pressure is on. Shares are down a whopping 42% during the past three months alone as investors remain uncertain about the social network's ability to reinvigorate its slowing user growth. During the company's earnings call next Wednesday, investors will be hoping management can reduce uncertainty and provide some concrete information on management's plans to begin attracting more users.

The stakes are particularly high going into this call, as it follows the first quarter in which returning co-founder Jack Dorsey has been permanent CEO. Taking on the role in October, Dorsey has now had the permanent CEO title for about four months. And including his time at the company as the interim CEO, Dorsey has been at the helm since the first half of June of last year. To say the least, Dorsey has had enough time to begin to implement some new strategies.

Here are three questions the CEO may need to answer on Wednesday. 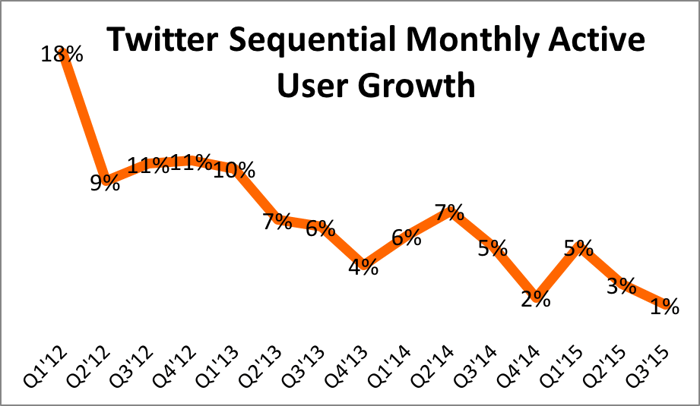 Not only does this represent a further deceleration for the company's user growth, but it's also well below Facebook's (META 1.26%) 3% sequential user growth in its most recent quarter. Investors expect better growth than this, as Twitter's 320 million monthly active users is far behind Facebook's 1.59 billion monthly active users. After all, investors may wonder, if Facebook can grow its user base this fast at its size, then why can't Twitter grow users this rapidly?

Dorsey is well aware of the company's user growth problem and he has said the company will be focusing on ways to begin to attract a wider audience. But investors will want to know when they can expect to see this actually happen.

2. How far is Twitter willing to go to attract more users?
With Dorsey recently tweeting screenshots of paragraphs of text on his Twitter account, there's been speculation that the company could soon lift the 140-character limit on tweets.

Indeed, a report from Re/code in January said Twitter could increase the 140-character limit to 10,000 characters as early as March.

Is the company going to be bold enough to make big changes to transform he platform into one with mass-market appeal?

3. When can investors expect to see big changes?
Compared to Facebook, Twitter is arguably slow when it comes to execution. While the company is beginning to show some signs that it may be picking up its pace of innovation more recently, it's going to have to innovate more quickly on a regular basis to build investor confidence in Twitter's ability to execute.

Consider how rapidly Facebook decided it is going to roll out its new Like button, which is dramatically different than the standard thumbs-up like button we know today, to not just Facebook but to all of the company's platforms, according to a comment from Facebook CEO Mark Zuckerberg during the social network's fourth-quarter earnings call. The first time anyone even heard of the new button was in October, and now the company is getting it ready for a global rollout.

Twitter reports fourth-quarter results after market close on Wednesday and will host a live conference call on the same day at 5:00 p.m. ET.