Please ensure Javascript is enabled for purposes of website accessibility
Log In Help Join The Motley Fool
Free Article Join Over 1 Million Premium Members And Get More In-Depth Stock Guidance and Research
By Daniel B. Kline - Feb 5, 2016 at 8:29AM

The company finished the year with a strong quarter.

Charter Communications (CHTR 2.64%) closed out its year -- and perhaps the company in its current form -- in impressive fashion.

In some ways, the cable and Internet provider's fourth-quarter results serve as little more than a placeholder marking time until the Federal Communications Commission rules on Charter's attempts to acquire Time Warner Cable (NYSE: TWC) and privately held Bright House. Should those deals be approved -- and many expect that a decision could come during the first quarter -- Charter will more then double in size and take on a new name, New Charter.

But, even without adding TWC and Bright House to its portfolio, the company had an impressive Q4, raising its residential and small and medium business customer base to 6.7 million, an increase of 352,000, or 5.6%. Perhaps more importantly, the company gained video subscribers for a full year for the first time in a decade, adding 33,000 for the quarter and 11,000 for the year. Assuming the merger is approved, Charter investors should also be encouraged that Time Warner Cable also bucked the cord-cutting trend to add 54,000 pay-TV customers in Q4 and 32,000 for the full year.

Charter CEO Tom Rutledge was encouraged by the results and commented on them in the company's earnings release:

Our consumer-focused product and service strategy continued to drive Charter's accelerating customer growth in 2015, including positive video net additions. [...] We look forward to bringing Charter Spectrum to the Time Warner Cable and Bright House footprints following the close of our transactions, offering consumers better products, prices and service, driving greater growth for our new company and our business partners, and creating value for shareholders. 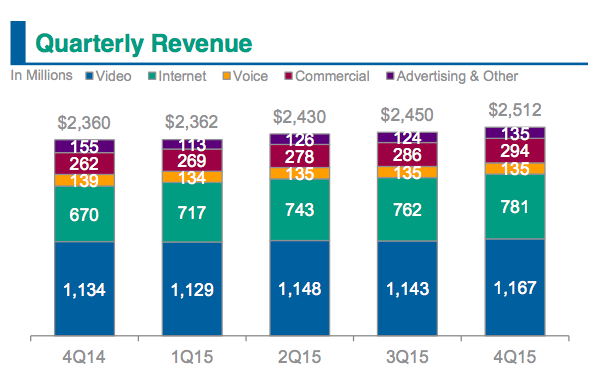 Here is how Charter's revenue broke down over the past five quarters. Source: Charter

The company did lose $122 million in the quarter, compared to a loss of $48 million in the fourth quarter of 2014. "The year-over-year increase in net loss was driven by $231 million of interest expense related to the financing of Charter's pending transactions with Time Warner Cable and Bright House, offset by higher income from operations and lower income tax expense," the company wrote.

The waiting is the hardest part
While the company had an encouraging year, it's somewhat irrelevant when you consider how much it will change assuming its three-way merger plan is approved. The major takeaway from Charter's Q4 and full-year results is that, assuming it can manage the larger operation as it has run the current company, what it's doing has worked.

Charter has fought off cord cutting and expanded its Internet and commercial customer base. That bodes well for what will happen if 2016 witnesses the successful completion of its acquisitions and the launch of New Charter.