Please ensure Javascript is enabled for purposes of website accessibility
Log In Help Join The Motley Fool
Free Article Join Over 1 Million Premium Members And Get More In-Depth Stock Guidance and Research
By Daniel B. Kline - Feb 5, 2016 at 6:07AM

The company has profited from the success of what could become the biggest movie of all time.

May the Force be with you. 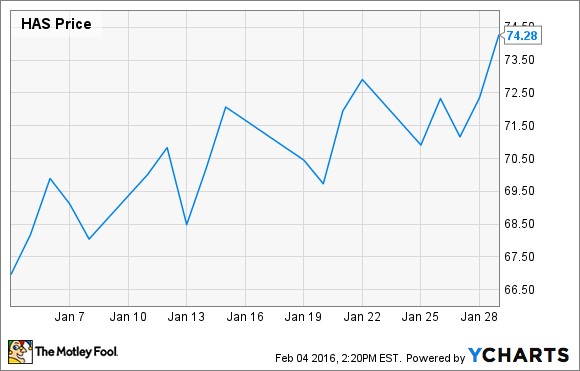 What: Hasbro stock climbed steadily in January, which you can attribute largely to the success of The Force Awakens and multiple reports of Star Wars toys being holiday bestsellers. The company had to fend off some bad publicity over the lack of toys based on Daisy Ridley's Rey, the lead character in the movie. But it addressed the #WheresRey protests quickly, got more toys featuring her into stores, and it's possible that the media attention fell into the "any publicity is good publicity" realm.

Star Wars was on track to earn $3 billion-$5 billion in merchandise sales in 2015, with about $1 billion of that coming from wholesale toy sales, according to The Los Angeles Times. Given the fact that the movie became an even bigger hit than expected, that momentum carried into January, and likely well beyond that.

So what: The toy business has generally been about building strong brands, and Star Wars has been one of the strongest. But the impact of the new film has created a new generation of fans, who now have their own characters to identify with. In fact, Hasbro's biggest problem may be keeping up with demand, something the company admitted was a problem when The Force Awakens line first went on sale in September, according to Quartz.

Those problems were largely solved during the holiday season, but going forward, matching supply to demand may be tricky.

Now what: Star Wars toys have been strong sellers, even when a new movie wasn't planned or playing in theaters. Given that new owner Disney has plans to release a new movie every year, the toy line should stay hot on a perennial basis. That's good news for Hasbro, which should be able keep its sales momentum as it learns more about demand going forward.

At some point, the Star Wars bump will become baked into the company's stock price, but as long as the movies keep being hits -- and there is little reason to assume they won't be -- the toys should support Hasbro's earnings. This was not just about a good holiday season, or even a January stock boost; it was a veritable disturbance in the Force that should have positive benefits for the company for a long time.