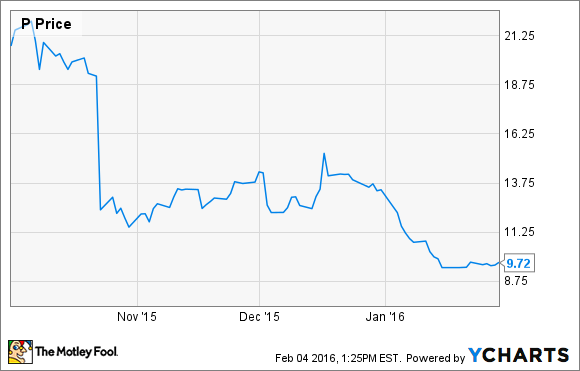 What: Pandora's price has fallen steadily since it reported Q3 earnings in October. That report was not even a bad one. The company slightly missed analysts' revenue estimates, but still saw revenue grow by just over 30%. In addition, earnings per share came in at $0.10, right at the point of consensus expectations.

That's below the average analyst expectation of $351.9 million, according to a piece by my Fool colleague Timothy Green, which examined the company's 2015 stock drop.

So what: Pandora didn't give any guidance as to why it lowered expectations for the quarter. That news, coupled with the alarming slowdown/stoppage of its growth, legitimates investors' concerns. The streaming-media company has always been in the business of amassing users with the idea that if it had a big enough audience, it could make money.

That might be true, but a drop in listeners quarter over quarter coupled with heightened competition and the rumors of another major player getting into the subscription streaming music game, rightly concerned investors. Pandora has always been a bit shaky as a business, and if it's not steadily growing, its future becomes more suspect.

Now what: Pandora will ultimately benefit from connected cars -- vehicles that have a built-in Internet connection -- but that's not a near-term solution to its problems. To allay investor fears, especially with the giants it does and might compete with, the company needs to get back to adding subscribers.

The company has plans to do that by tweaking its offerings, as well as by expanding internationally. It could also quell some concerns by growing revenue at Ticketfly, the ticketing service the company purchased in October.

"Ticketfly will be truly transformative, extending our long-standing strength in music discovery to the large and fast-growing world of live events," the company said in its Q3 release.

Pandora can turn around, but it must solve its unproven business model, return to growth, and diversify its revenue beyond advertising and subscriptions. The company releases its Q4 numbers on Feb. 11.