The professional networking platform exceeded its own fourth-quarter revenue and earnings projections, but shares slide as investors look ahead to the outlook for the current year. 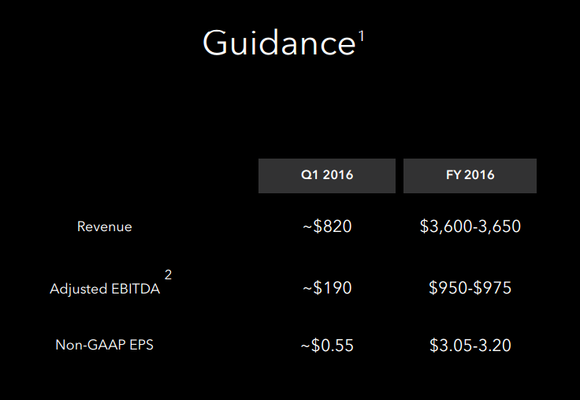 The information found on this slide in LinkedIn's Q4 2015 investor presentation apparently threw many an investor into a black mood. Data source: LinkedIn.

LinkedIn Corporation's (LNKD.DL) fourth-quarter 2015 earnings released Thursday revealed a solid three-month performance to close out the year. However, investors reacted adversely to the company's 2016 revenue and earnings guidance, sending the stock down drastically at the market open on Friday. Below, let's review the fourth-quarter numbers and the forecast that so unsettled its shareholders.

The numbers
LinkedIn recorded Q4 2015 revenue of $862 million, a 34% increase over the comparable prior-year quarter. This exceeded management's forecasted range of $845 million-$850 million. Adjusted earnings before interest, taxes, depreciation, and amortization, or EBITDA, of $249 million, similarly landed beyond management's guided range of $210 million.

Talent solutions, its largest business segment, accounted for 62% of total revenue during the quarter. The segment's $535 million in sales represents an increase of 45% over 2014, and includes a $49 million revenue contribution from recently acquired online learning powerhouse Lynda.com.

The company's remaining business segments, marketing solutions and premium subscriptions, grew at the less blistering but still quite respectable rates of 20% and 19%, respectively.

It's important to put a bit of context around these numbers. Due to its heavy non-cash expenses like stock-based compensation, LinkedIn emphasizes non-GAAP (generally accepted accounting principles) metrics, such as adjusted EBITDA, in its earnings reports. On a GAAP basis, the company posted a net loss of $8.4 million during the quarter. For the full year, LinkedIn's GAAP net loss was $166.1 million, on revenue of $2.9 billion, versus its adjusted EBITDA income of $780 million.

The outlook
LinkedIn provided Q1 2016 revenue guidance of $820 million and an adjusted EBITDA target of $190 million. The top-line guidance represents a healthy growth rate of nearly 29% versus the first quarter of 2015.

Management specifically noted that the growth rate in its talent solutions business segment would decline from roughly 30% in 2015 to "mid-20% growth" in 2016. The company specifically cited weakness in EMEA (Europe, The Middle East, and Africa) and APAC (Asia-Pacific) as a factor, due to "current global economic conditions."

As I cautioned in my earnings preview earlier this week, a possibility existed that tentative global economic conditions might impact LinkedIn's outlook going forward, as the company now sees about 38% of total revenue from non-U.S. business, and has identified developed global economies as well as emerging markets like China and India as key areas for future growth. This possibility seems to have come to pass.

Why is LinkedIn's stock being punished so soundly on this outlook? Primarily, a slowdown in talent solutions is unsettling as this segment represents the core -- nearly two-thirds -- of LinkedIn's business. Since, as I pointed out above, the organization's two other business segments are already exhibiting just 20% growth rates, the company possesses no other revenue stream to rely on for top-line acceleration.

This means that either the macroeconomic conditions cited by management will have to change, or incremental improvements, such as the recent relaunch of the company's flagship "Recruiter" hiring product, will need to take hold for fresh sales momentum to arise.

Lost in the selling frenzy on Friday will likely be a slight projected pick up in earnings, as the company is forecasting a gain of 100 basis points in adjusted EBITDA as a percentage of revenue. LinkedIn's adjusted EBITDA landed at 26% of total revenue in 2015, and management expects to be able to improve this to 27% in 2016.

As LinkedIn matures, it will experience a natural deceleration in revenue growth. Shareholders understand this, and have tended to support the stock price as the company has grown up -- over the last three fiscal years, LinkedIn's annual revenue growth rate has declined from 57% to 35%. But with the entire year ahead of us, expansion at a 20% rate seems too much of a drop-off for shareholders to bear, and too soon.