Alexion Pharmaceuticals released its fourth-quarter and full-year earnings earlier today. Here are the key numbers that investors need to know.

Image by TBIT via Pixabay.

Biotech heavyweight Alexion Pharmaceuticals (ALXN) released its fourth-quarter 2015 earnings results before the opening bell Wednesday. Like many other biotechs, Alexion's shares have taken a beating recently, as they have traded in lockstep with the iShares Nasdaq Biotechnology ETF (IBB -1.02%) over the past few months. 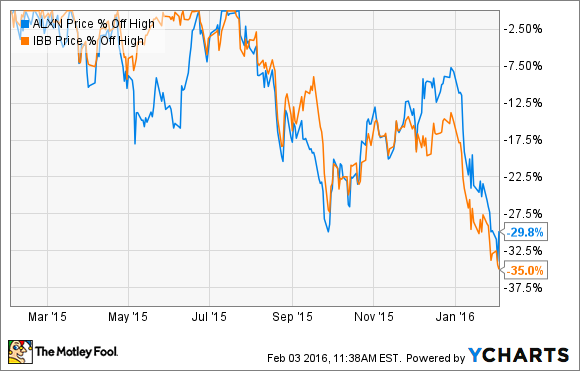 Shares have now fallen by more than 25% since hitting their summertime highs. While that's less than the IBB, you can bet that its management team hasn't been happy with its stock performance and was looking to shower its investors with good news in the earnings report.

The headline numbers here are a bit misleading, as like many other companies that do business overseas, the huge swings in the currency markets greatly affected Alexion's fourth-quarter reported results. If you adjust for those movements, its total revenue would have come in $45 million higher, which would have added another 8% to the top line.

The reported net income and earnings-per-share numbers are also a bit misleading, as Alexion is still digesting its $8.4 billion acquisition of Synageva Biopharma. So far that acquisition has only added to its expenses without making any contribution to the the top line, which is why net income fell.

What happened with Alexion Pharmaceuticals this quarter?
Looking beyond the headline numbers, Alexion had plenty of information to share with investors.

Soliris (eculizumab) continues to be the company's cash cow, as it produced revenue of $689 million during the quarter, up 15% from the year ago. Alexis also continues to make progress with its many ongoing clinical trials using Soliris to treat new diseases.

The company also continues to make significant progress as it works to build out its emerging metabolic franchise. Highlights from the quarter include the following:

What management had to say
Alexion's CEO David Hallal sees the company having a prosperous year ahead, stating:

"In 2016 we will continue to focus on serving an increasing number of patients with PNH and aHUS globally, executing on the global launches of Strensiq and Kanuma, and advancing our complement and metabolic pipeline programs to drive our future growth. We look forward to reporting on multiple milestones in our expanding development pipeline in 2016, including results from two registration trials, and our broad and innovative mid-stage development programs."

Management also confirmed that it will move four of its 30 preclinical programs into the clinic in 2016.

Looking forward
As usual, Alexion's management was willing to provide investors with guidance for the full year. They expect revenue for the year to land between $3.05 billion and $3.1 billion, which would represent growth of at least 17% from the $2.6 billion the company reported in 2015. Those results are expected to be driven by $2.9 billion to $2.925 billion in Soliris sales, with its two new metabolic drugs -- Kanuma and Strensiq -- adding another $150 million to $175 million to the mix. Alexion also expects currencies to continue to be a headwind in 2016, as revenue guidance accounted for another $120 million hit from FX movements.