January was a bad month for most of the stock market, and the airline industry wasn't spared from the carnage. 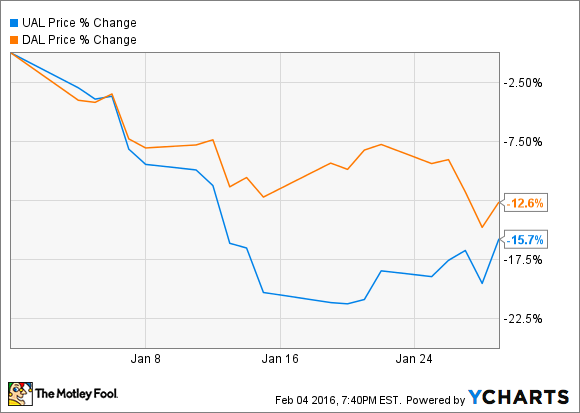 Who cares about cheap oil?
Many pundits have noted recently that stock prices and oil prices have become highly correlated to one another in the past few months. For the first three weeks of January, oil prices tanked, bringing down the stock market -- including shares of Delta Air Lines and United Continental. Oil prices then rebounded somewhat in the last week and a half of the month. 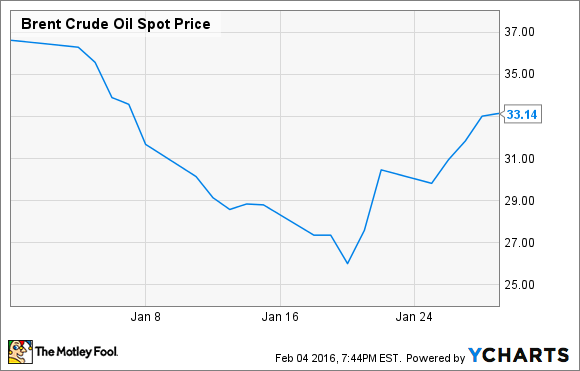 Of course, low oil prices should be good for airlines, since jet fuel is one of their biggest expenses. However, most investors haven't seen it that way. Instead, many people have worried that low oil prices will drive airlines to expand at an unsustainable pace.

This concern seems rather overblown. That said, there have been some direct negative impacts on airlines from low oil prices. United Continental has fared the worst, as demand has fallen at its hub in Houston, the epicenter of the U.S. energy industry. Weak oil prices also probably hurt United and Delta by cutting into international travel demand in oil-exporting nations.

Unit revenue keeps falling
Declining unit revenue represented a second issue weighing on shares of Delta and United Continental last month. On Jan. 11, United cut its Q4 unit revenue guidance in an investor update. Whereas the carrier had initially predicted that passenger unit revenue would fall 4% to 6%, it stated that the decline would be in the 5.75% to 6.25% range.

Later in the month, Delta and United both projected that unit revenue would decline even faster in Q1 than it did last quarter. Investors weren't comforted by the fact that both airlines still expect profit growth thanks to their substantial fuel savings.

Other worries linger
Several smaller issues also haunted airline stocks last month. The dollar continued to strengthen against many other currencies during January. The strong dollar has been a continuing source of unit revenue pressure for airlines with significant international operations, including Delta Air Lines and United Continental. 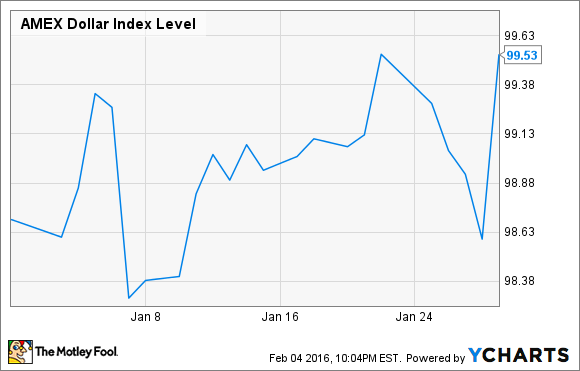 Investors have also started to worry about the potential impact of the Zika virus on air travel, particularly to and from Brazil. Finally, both Delta and United noted unit revenue headwinds in the transatlantic market stemming from the November terrorist attacks in Paris.

Don't sweat the small stuff
There are a lot of potential pitfalls threatening to sap the profitability of airlines like Delta and United. But at the same time, it's important to recognize the resilience of the U.S. airline industry in recent years.

The legacy carriers have remained profitable despite facing headwinds like the Arab Spring (which caused oil prices to skyrocket), the European sovereign debt crisis, and rising competition from low-cost foreign airlines. There's no reason to think that Delta and United will have any more trouble managing their current challenges successfully.