The best-selling luxury large sedan in the U.S. wasn't Daimer's (OTC:DDAI.F), Mercedes-Benz S-Class, which has a history of leading sales in the segment. It wasn't BMW's (OTC:BAMXF) 7-Series or its 6-Series either. And it wasn't even one of Volkswagen Group's (OTC:VWAGY) premium Audi and Porsche models. It was Tesla Motors' (NASDAQ:TSLA) Model S -- by a long shot. Going further, every key competing model saw U.S. sales decline in 2015 while Model S sales jumped.

Here are the figures, along with a bit of context
Following Tesla's first quarter in 2015, the company noted during its annual shareholder meeting its Model S was outselling every other premium sedan in North America for the quarter. Tesla CEO Elon Musk argued the Model S was proving just how compelling its vehicles are -- not just among electric vehicles, but even when compared to gas-powered competition. He suggested the trend represented changing behavior in the segment as consumers recognize the value in Tesla's all-electric model.

"As we bring out new models, in the Model X -- in the SUV category, obviously -- and then more affordable cars, this bodes well for being able to replicate this share for Tesla in other product segments," Musk explained.

Musk was correct in extrapolating the single quarter's results as an indicator of changing behavior. Model S continued to outsell premium large sedans in North America the remainder of the year -- and it crushed competition in the U.S.

Here are the sales figures from the year in the U.S. for Model S and its most formidable competition.

Sales data for all models except Tesla's Model S are retrieved from Good Car Bad Car. Tesla sales are based on an estimate by EV Obsession. Chart source: author.

Not only did Model S outsell competition considerably, but it was the only vehicle listed in the above chart which actually increased sales during 2015. And Tesla's gains appear to -- at least in part -- come at the expense of its competition. Sales were down compared to 2014 for every large luxury car in the chart except the Model S.

Looking at this data, Daimler, BMW, and Volkswagen's Audi and Porsche brands, along with other Model S competition, may now be thinking hard about a defensive strategy against Tesla's successful Model S. Indeed, all three German luxury-car companies have now shown off their own battery-electric concept vehicles. Perhaps they've concluded the only way to compete with Tesla is to go electric. But with all of the electric concept vehicles aimed at Tesla's Model S about two years or more away production, automakers will have to attempt to compete with their gas-powered models for now.

Sales are soaring
It's no surprise that Tesla's Model S outsold competition in 2015. During 2014, demand for Model S vehicles -- barring China, where the company overestimated demand after scalpers artificially inflated orders -- mostly outstripped production. So, for Tesla, 2015 marked a year of ramping up production to capture as much rising demand as possible.

Growth was the overall narrative for the Tesla in 2015, with its year-over-year growth in vehicle deliveries actually accelerating. 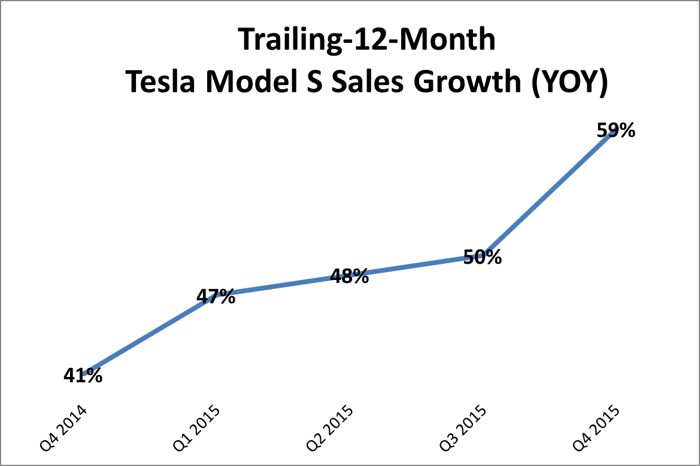 Tesla's total global Model S sales during 2015 were over 50,000, up from 32,000 in 2014. During 2014, the company said about 55% of new Model S were delivered in North America, 30% in Europe, and 15% in Asia Pacific. Investors will likely get an update on this geographic breakdown of its 2015 deliveries when the company reports quarterly results on Wednesday.

Growth for Model S sales probably won't come as easy, going forward. With Model S now outselling competition as meaningfully as it is, it may be difficult for the company to grow sales of the vehicle in the U.S. during 2016.

But its unlikely Model S sales have peaked, as the company has yet to update the vehicle's 2012-launched design. Further, Tesla continues to refrain from spending money on advertising. So, if demand dampens, Tesla can either revamp the design, initiate advertising, or both.