Delphi's stock has been pounded, but it's not alone. Here's a look at its fourth-quarter and full-year results and how to interpret them.

It hasn't been a fun earnings season for players in the automotive industry. Even for Detroit's two largest automakers, Ford (F 0.25%) and General Motors (GM -0.55%), both posted record annual profits and were immediately sold off by the market.

Delphi Automotive PLC (NYSE: DLPH) an automotive parts supplier, was also caught up in the downdraft. Was this warranted in light of it its own fourth-quarter results? Let's dig into the results, the difference between its GAAP and adjusted figures, and understand what's impacting the company's first-quarter of 2016. 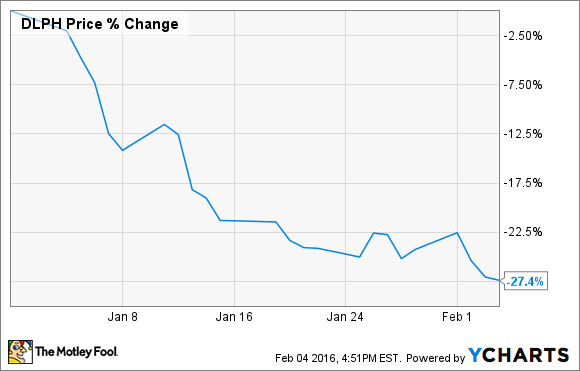 Lots of unusual items
Delphi's financials have a whole bunch of adjustments, which aren't always a bad thing as long as investors understand the nuances.

Starting from the top, Delphi's reported revenue moved 3% higher in the fourth-quarter of 2015 to $3.8 billion, compared to the prior year's fourth-quarter. It should be noted that the revenue figure doesn't include the impact of the E&S divestiture or the HellermanTyton acquisition. If you want to take it a step further, Delphi's revenue was 11% higher during the fourth-quarter, rather than the 3% gain, when you use constant foreign exchange and commodity rates.

Personally, I would judge fourth-quarter results without accounting for constant currency rates. It's like your friend saying he could have dunked the basketball if he wasn't tired from playing 40 mins during the game. It's great to know you could dunk the ball, but it doesn't make the actual outcome different – the strong dollar is negatively impacting many American businesses right now. Period.

Next, we have operating income and net income.

However, Delphi's adjusted figures tell a different story. Delphi's adjusted operating income, which excludes restructuring and other special items, checked in with a slight increase from $497 million during 2014's fourth-quarter up to $503 million last year. The story was similar for Delphi's adjusted net income which posted a slight gain from $386 million to $391 million, during the same time frame.

Which figures work best for investors? In my opinion, go with the adjusted figures for the fourth-quarter which show small gains rather than huge drops – here's why. 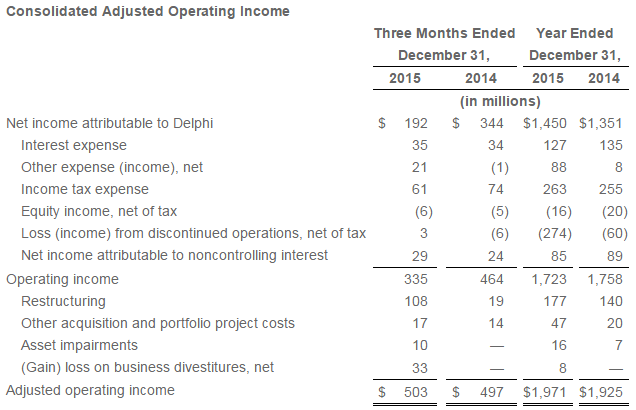 The best example here is looking at the difference between the two fourth-quarters. If you look at the restructuring line you can see that 61% of the company's restructuring costs for the entire year landed in the fourth-quarter. When adjusting for that, you get a more accurate picture of Delphi's underlying business performance.

Now, if you look to the right at the full-year figures, you can see it balances out pretty fairly year to year. That means the adjusted figures look higher in total, but the year-over-year growth is nearly the same whether you use GAAP or Delphi's adjusted figures, and to me growth is what to look at.

In this instance, using Delphi's quarterly adjusted figures makes more sense, and either figure balances out pretty well for the full-year.

A headwind to start off 2016
Speaking of headaches, Delphi had a labor force headache during the fourth-quarter which will negatively impact its first-quarter of 2016. That's because China's automotive market slowed early into 2015 and then stalled out completely over the summer – even posting a rare couple months of declining new-vehicle sales. Due to that slowing growth, Delphi laid off about 4,000 workers.

But then, wouldn't you know it, China's government decided to stimulate the automotive market by cutting the purchase tax on new-vehicle sales in half. It worked like a charm and the stalled automotive sales in China went back to more than double digit gains during the fourth-quarter. That forced Delphi to rehire 6,000 workers as production rebounded. All in all, that generated about $25 million in costs for Delphi, and some of that will negatively impact the first-quarter results. On the bright side, Delphi's labor headache is likely to smooth out over the full-year because China's tax incentive on new vehicles lasts through 2016.

Planet Labs Grows Quickly. Its Stock -- Not So Much.