Roger Goodell earns eye-popping compensation as NFL commissioner, and is sometimes referred to as "the most powerful man in sports."

As commissioner of the National Football League, Roger Goodell is one of the most powerful men in sports, and estimates suggest that Goodell's net worth is in the neighborhood of $75 million. 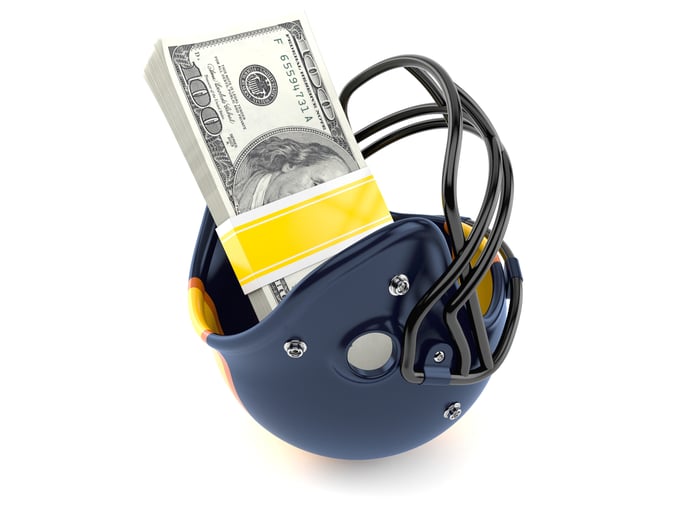 Goodell took over as NFL commissioner in 2006, and his power and personal wealth have increased dramatically in the years since. NFL tax filings indicate that the league paid Goodell roughly $123 million for his first seven years as its top executive, jumping substantially after the 2011 NFL lockout. Goodell is signed through March 2019 with sizable pay and bonus triggers, so even if he were to leave the league after that date, his time as NFL commissioner would have enabled him to accumulate an impressive net worth.

How Roger Goodell climbed the sports world and built his net worth
Goodell worked his way up the NFL ladder, having started as an administrative intern for the league in 1982  and going on to fill a number or roles within the league before being appointed as vice president and chief operating officer in 2001. In 2006, he replaced Paul Tagliabue to become only the third commisioner in NFL history. The league's demonstrated preference for stability at its top position suggests there is a good chance that Goodell will serve as commissioner beyond the expiration of his contract in 2019, even though his tenure has seen its fair share of controversies. While flareups including "Deflategate" and the league's handling of spousal and child abuse issues among players led some sports fans and commentators to call for Goodell's replacement, he has done an impressive job of managing the world's most valuable sports league.

Goodell has guided the league to explosive revenue growth and earned a reputation as an expert deal-maker. From 2007 to 2014, league revenue roughly doubled to $12 billion, and it looks like the NFL is on track to hit Goodell's revenue targets of $16.1 billion in 2018 and $25 billion in 2027. So, while some critics have attacked Goodell's NFL compensation as being too high because of his perceived fumbling of certain issues, it's had to argue that he has not been good for the NFL's business.

Under Goodell's direction, the NFL has signed a two-year deal with CBS Corp and Comcast's NBC that will split viewership of 10 Thursday Night Football games between the networks at $450 million per year -- a 50% increase over the $300 million that CBS paid for broadcast rights to the format in 2015 despite the fact that the number of Thursday night broadcasts will only jump from 8 to 10.

Other successful Goodell-directed moves include a $12 billion, 8-year deal signed with DirecTV in 2014 to provide content for the satellite television provider's popular Sunday Ticket and numerous successful negotiations with the players association.

Goodell and the NFL have high bargaining power because the league's football programming is a ratings powerhouse. 26 of the top 27 programs in 2015's fall television season were NFL broadcasts, and the value of the league's content is only bolstered by competition between cable and online content providers and opportunities in international markets. As the leader of one of the biggest games in entertainment, Roger Goodell's impressive successes have enabled him to command high compensation.

What's next for Roger Goodell
Barring the emergence of extreme controversy, Goodell's role in the NFL is under little threat, and there seems to be a good chance that he will stay on as commissioner beyond the expiration of his current contract in 2019. Even if he were to be ousted from his role as commissioner, he would still receive hefty compensation.

Following controversies in 2014 an 2015, there were rumblings that terminating Goodell's contract would have required the NFL to pay him roughly $150 million. As such, Roger Goodell's net worth can reasonably be expected to grow substantially in the next several years regardless of whether he stays on as NFL commissioner.

Keith Noonan has no position in any stocks mentioned. The Motley Fool has no position in any of the stocks mentioned. Try any of our Foolish newsletter services free for 30 days. We Fools may not all hold the same opinions, but we all believe that considering a diverse range of insights makes us better investors. The Motley Fool has a disclosure policy.