What: Shares of Ionis Pharmaceuticals (IONS -1.32%) had a rough January as shares dropped more than 36% during the month, according to data from S&P Capital IQ. 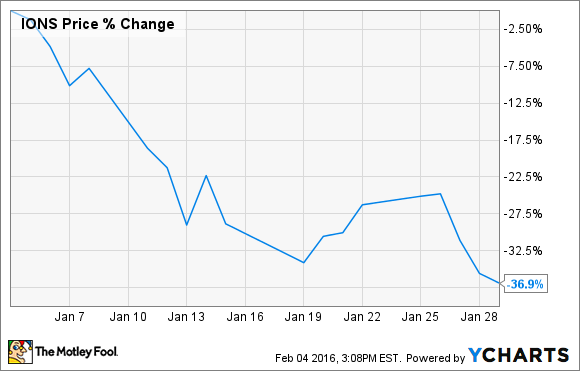 So what: Everything related to biopharmaceutical dropped precipitously during the month of January, so it wasn't surprising to see Ionis get caught in the storm. Still, the company had plenty of good news to share with investors during the month:

Now what: When the stock market gets a cold, biotechnology stocks tend to get the flu, so there isn't much that investors in the space can do but sit by and watch the carnage.

With 38 drugs in development and a cash-rich balance sheet, Ionis is still one of the best-positioned biopharmaceutical companies out there. Investors with a stomach for volatility might want to give this company a closer look.

Brian Feroldi has no position in any stocks mentioned. The Motley Fool owns shares of and recommends Ionis Pharmaceuticals. We Fools may not all hold the same opinions, but we all believe that considering a diverse range of insights makes us better investors. The Motley Fool has a disclosure policy.