These three trends look to shape the fast-growing gaming industry this year.

The video games industry is booming. Interactive entertainment is more popular than ever, and games publishers are making big moves and delivering impressive results. To put the gaming boom in perspective, an investment in any of the major software publishing companies over the last five years would have produced significantly better returns than any of the major index funds. 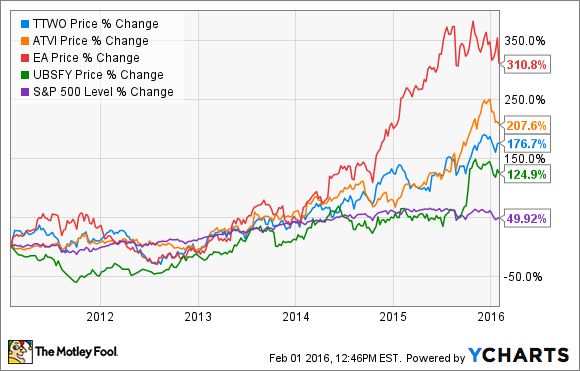 Looking at just the past year, shares of Electronic Arts (EA -1.50%) are up roughly 17%, while Activision Blizzard's (ATVI -0.71%) stock gains over the period are even more impressive at greater than 65%. Meanwhile, Ubisoft is up more than 35%, and Take-Two Interactive (TTWO 0.39%) is up more than roughly 16%, while the S&P 500 is down single digits over the stretch.

With mobile gaming booming and what looks to be a receptive market for the most recent platforms from Sony (SONY -1.57%) and Microsoft (MSFT -1.94%), as well as the release of some potentially game-changing hardware and software, 2016 could be a pivotal year for the industry. Investors should keep an eye on these three video game trends.

Virtual reality hits the scene
Thus far, the biggest VR news in 2016 has been the $599 sticker shock of Facebook (META -0.54%) and Oculus Rift's headset, but the cost of the broader technology will drop with time and probably won't derail the long-term success of virtual reality.

In addition to the Oculus Rift, 2016 will see new headsets from Sony, HTC, Microsoft, and others, and this could be the year that the pending display revolution begins to crack the mainstream.

Virtual reality represents an opportunity for new takes on existing mediums, while also paving the way for uses and applications that are only possible with the new technology. The success of the VR push in gaming could provide an indicator as to how soon the technology will go mainstream. Gaming enthusiasts tend to be tech-savvy, and this consumer trait -- combined with heavy pressure within the games industry to deliver cutting-edge technologies and experiences -- has made video games a forerunner for transformative advances in tech.

In addition to sales performance for the major virtual-reality and augmented-reality headsets released in 2016, investors should watch the reception to developer applications and gauge early adopter reactions to apps and suites. Companies including Facebook and Nvidia are aiming to serve as a service platform for VR applications, and the emergence of early leaders could do a lot to shape the evolution of the tech.

Digital sales trending up
Gamers are increasingly buying their gaming content digitally, a trend that is posing a major challenge to retailer GameStop while rapidly expanding the earnings of games publishers. In the last reported quarter, Take-Two Interactive saw its digital sales revenue increase 57% from the prior-year period, Activision saw a 38% increase, and EA posted a 16% gain. Digital sales are typically high-margin, and cutting out physical production costs and retail middlemen is creating earnings growth that has translated into big stock gains.

When gaming publishers release earnings this year, digital sales growth is one of the key metrics to watch. In addition to selling traditional software through downloads, publishers are increasingly relying on update packs and microtransactional revenue, and digital sales composition provides a useful indication for market receptivity to an increasingly popular format as well as evolving content offerings.

PlayStation 4 and Xbox One should be hitting their stride
2016 is a crucial year for the future of the console industry. Given that mobile sales now make up over half of all gaming revenue and given the pressure that gaming-enabled set-top boxes put on the traditional console market, sales of the latest consoles from Sony and Microsoft have been surprisingly resilient. PlayStation 4 has crossed 35 million units sold, while Xbox One is believed to be in the neighborhood of 15 million units sold.

Now that unit sales and software development for PlayStation 3 and Xbox 360 are finally dropping off significantly, their respective successors need to grow their user bases by large margins. Roughly two years after the launch of PlayStation 4 and Xbox One, developers should be more capable of utilizing the technological strengths of each system, and strong graphical showcases should help to move hardware. Sony and Microsoft are also likely to implement significant price reductions for their gaming systems this year, which should drive a big sales spikes relative to previous years.

Investors should weigh the strength of sales and content on the traditional console platforms relative to the performance of set-top boxes as gaming devices for a hint at whether the next PlayStation and the next Xbox would be viable as hardware platforms or whether Sony and Microsoft need to dramatically change their platform approach as the market shifts.