The first month of 2016 is in the books, and the markets didn't perform too well. If you're like me, you spent a lot of your time watching your portfolio decline in value.

However, one of the secrets to successful long-term investing is that you should love when stocks drop like this, as it creates an opportunity to set yourself up with great long-term investments at a discount. With that in mind, here are three of Warren Buffett's favorite stocks that are on sale right now.

The best of the "big four" banks
Wells Fargo
(NYSE:WFC) has been a longtime Buffett favorite. Berkshire Hathaway (NYSE:BRK.A) (NYSE:BRK.B) owns an 8.6% stake in the bank, which is currently worth more than $22 billion, and it's not hard to see why.

Wells Fargo is consistently the most profitable of the big four, thanks to a history of smart risk management and efficiently run operations. You can see this when you compare Wells' return on assets (ROA) and return on equity (ROE) with the others (the blue line in the following chart). 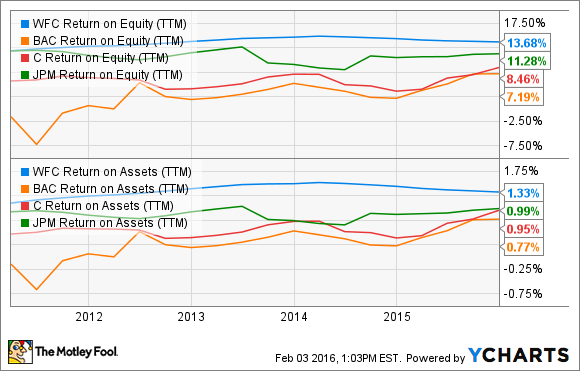 The bank continues to grow at an impressive rate. The bank's loan portfolio has grown 7% year-over-year, and the deposits have grown by 6%. Plus, revenue continued to grow in 2015, despite the historically low interest margins across the banking sector.

Despite the strong numbers, Wells Fargo is trading at a price-to-book valuation not seen since 2013. The weakness in the stock market, and in the financial sector in particular, makes it an excellent time to get in to this long-term winner.

Big blue is on sale
International Business Machines (NYSE:IBM), or IBM is in the middle of a rather lengthy turnaround, and it appears that investors are growing impatient. Shares have lost more than 40% of their value since their 2013 highs, and got smacked down again after the company's 2016 guidance failed to impress.

In 2015, IBM's revenue fell by 9% and earnings dropped by 17%. Some of this was due to currency headwinds, which reduced 2015's sales by 8%, but the results were less than impressive nonetheless. And the company is projecting that earnings will decline further in 2016.

However, there are still some good reasons to own IBM. First, it trades at just nine times earnings and pays a 4.2% dividend yield, both of which should offer some degree of downside protection. Also, the company's "Strategic Imperatives" division, which focuses on products for cloud computing, data analytics, and user engagement. This division makes up 35% of IBM's revenue, and posted 16% year-over-year growth on a constant-currency basis.

Buffett believes in IBM long-term and so do I, thanks to its strong financial position and excellent management team. Berkshire now owns 8.2% of the company, and could see major profits if IBM's transition is a success.

A smart play on the auto industry (Hint: It's not Tesla)
General Motors (NYSE:GM) has been the worst performer of the three stocks discussed here, down by 16% year-to-date as of this writing. It is also Buffett's smallest holding of the three -- Berkshire's 3% stake represents an investment of "only" $1.4 billion.

GM produced record earnings and margins in 2015, thanks to strong sales in trucks and SUVs, two high-profit types of vehicles. And, while revenue was down slightly in 2015, it was better than it seems -- just like IBM, General Motors was a victim of currency fluctuations since a significant amount of its business is international. On a constant-currency basis, GM's revenue actually grew by 4%.

The company's financial position is typical of a Buffett stock -- lots of cash, not a lot of debt. GM ended 2015 with $20.3 billion in cash and just $8.8 billion in debt, which should give it the financial flexibility to get through any economic conditions that arise. Additionally, the stock trades for just 10.9 times earnings, its lowest valuation since mid-2013.

Just a sampling
These three stocks happen to be great deals right now, since they've been beaten down lately and are now on sale. However, keep in mind that all of the stocks in Berkshire Hathaway's portfolio were selected for their durable competitive advantages, strong financial position, and competent managers. The bottom line is that any Buffett stock at an attractive price could be a smart addition to your portfolio, so keep an eye out for more bargains, especially if the market declines even more.