WhatsApp just joined the ranks of one of the most elite clubs in all of technology, which should also slowly drive its shift toward eventual profitability.

Is Facebook (META -1.30%) the most unstoppable company in tech?

Though other tech giants like Apple, Alphabet, and Amazon deserve mention as well, Facebook's business momentum, especially as of late, is impressive to say the least.

And though its core business remains the rocket largely propelling its soaring share price, Facebook's budding messaging empire is also firing on all cylinders, as another major milestone from WhatsApp demonstrates.

These seem like they should be typos, especially for a company that's a mere seven years old, but they aren't. Perhaps even more impressive, WhatsApp, which operates as an autonomous subsidiary of Facebook, only employs a mere 57 engineers to support a service of this capacity. However, per commentary from management, WhatsApp surpassing 1 billion users also brings with it an important business milestone for the company's budding monetization efforts.

The 1 billion user club
Facebook and CEO Mark Zuckerberg have long made it clear that their approach to creating lasting communications platforms emphasizes growth before monetization. However, the Facebook chief also cited 1 billion users as a critical juncture where monetization can now become a greater priority for WhatsApp's management, as you can see in a Facebook post from from Zuckerberg from earlier this week. 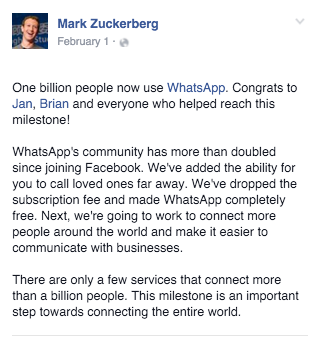 For context, WhatsApp announced in late January that it would officially drop its historic subscription model. Instead, like its Facebook-owned communication brethren Messenger, WhatsApp will gradually begin to build tools that allow corporate clients to engage with WhatsApp's burgeoning user base. For example, earlier in January, Facebook enacted a partnership with ride-sharing start-up Uber that allows users to hail an Uber from within Messenger. Other revenue-generating applications Facebook has layered in Messenger include customer service support and booking confirmations from travel companies all occurring within the communications app. So, as it slowly moves to monetize WhatsApp, expect founder Jan Koum and his team to follow a similar path that carries with it two benefits.

The first perk of employing this monetization strategy is that it avoids generating revenue through advertisements, which I think we can all agree ranges anywhere from benign to outright annoying depending their integration within a given service. In addition to not annoying its users, layering third-party apps and service onto its platform actually makes WhatsApp's platform stickier over the long term. Beyond the pull of being able to communicate with their friends and family, users will be less likely to stop using platforms like Messenger and WhatsApp if they'll lose an easy point of contact with customer service for companies they use frequently. This is just one of the many examples of the kinds of applications that can help make WhatsApp a more engaging platform, while also helping drive profits for Facebook investors.

Now that it sits in the enviable ranks of the 1 billion users club, expect WhatsApp to begin slowly switching its efforts from growth to monetization.