Please ensure Javascript is enabled for purposes of website accessibility
Log In Help Join The Motley Fool
Free Article Join Over 1 Million Premium Members And Get More In-Depth Stock Guidance and Research
By Tyler Crowe - Feb 7, 2016 at 10:45AM

Core Laboratories' most recent quarter showed it can still churn out cash better than the rest, and that should help investors sleep better at night.

Anyone that has been invested in Core Laboratories (CLB 4.55%) over the past 18 months or so can't be too pleased with the results. Ever since the company started warning of a slowdown in drilling activity back in May of 2015, the company's stock has been on the steady decline ever since. 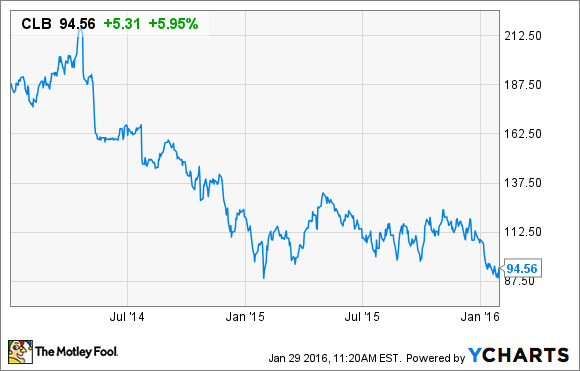 Over this time frame, we have seen revenue and net income decline 34% and 76% since their peaks, respectively. For many investors, that is more than enough reason to tuck tail and run. However, there is one quality the company still possesses that should give investors courage to stick around: It's ability to generate free cash flow at a high rate. Let's take a look at how the company did at converting its revenue stream to cash in the most recent quarter and why this is a sign that investors might want to stick around through this down cycle.

Cash Rules Everything Around Me
There are a lot of reasons that investors should like Core Labs as a business. It doesn't require a lot of capital spending on a regular basis to keep its business running, it has some pricing power in a commodity industry, and it has a wide range of clients from the small mom and pop oil producers to the worlds largest oil company: Saudi Aramco.

While these things are good indicators of a robust business, a good investment also needs to back those qualities up with strong financial performance and the ability to generate returns for shareholders. This is where Core really stands out. With few capital needs to keep the lights on, the company generates free cash flow at absurdly high rates.

Even this past quarter, where Core Labs reported one of its weaker quarters in recent history, the company was still able to generate $44 million in free cash flow. So even today with business prospects as dour as they have ever been, the company is still converting more than 23% of its revenue to free cash flow.

This high rate of cash flow has allowed the company to keep paying its dividend as well as maintain a certain level of share repurchases. It may not be retiring shares as quickly as it was when business was better, but Core has still been able to reduce its share count by close to 6% over the past two years. 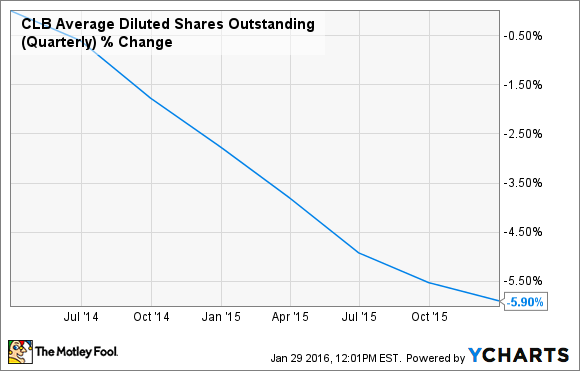 When so many other companies have needed to stop buying back shares to preserve cash, Core has been able to keep at least some of its share repurchase program in place that's certainly benefiting from the lower share price.

Can it keep this pace?
While the company has been able to keep up decent performance thus far despite industry headwinds, it's looking more and more like 2016 will still be a slow one for drilling and service activity for Core and its peers.

On Schlumberger's most recent conference call, CEO Paal Kibsgaard said that he and the company were not anticipating a return to increased drilling activity until 2017. The reasoning for the company's outlook is that drilling activity will lag any increase in oil prices to more sustainable levels because producers need to shore up their balance sheets first and foremost before increasing their spending again. Halliburton echoed some of these comments as CEO David Lesar pointed to North American service spending levels for 2016 to be 30-50% lower than last year.

If this is indeed the case, then we can probably expect Core's revenue to decline even more over the coming quarters. Management expects 2016 revenue to come in 10% lower at about $165 million for the year. If that is the case, then the company anticipates that its free cash flow will still be in excess of both its net income as well as its dividend obligations, which means that it should be able to keep buying back shares at these depressed prices.

What a Fool Believes
You really have to tip your hat to Core's management. The ability to generate such high rates of free cash flow even in this market for oil services is a pretty spectacular feat. For investors that may be sweating the decline, the company's ability to keep cash coming in the door and return it to shareholders should make this downturn a little easier to stomach and probably worth hanging on to your position.