Please ensure Javascript is enabled for purposes of website accessibility
Log In Help Join The Motley Fool
Free Article Join Over 1 Million Premium Members And Get More In-Depth Stock Guidance and Research
By Andrew Tonner - Feb 7, 2016 at 8:27AM

The introduction of Facebook's Sports Stadium ahead of the Super Bowl speaks to the social media giant's growing ambitions to disrupt Twitter's core use case. 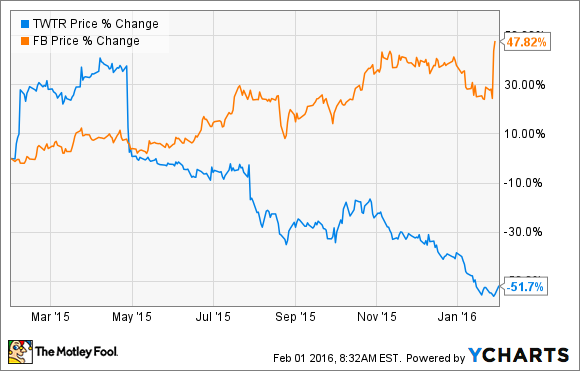 Facebook's recent earnings blowout again painted the company in sharp contrast to Twitter, whose ongoing pivot toward more mass-audience products is only just beginning. Unfortunately, Facebook appears intent on heading Twitter's gradual turnaround off at the pass, as a move that should come into greater focus with this weekend's Super Bowl demonstrates.

The product will serve as a central hub for all of the content on Facebook's platform related to various sporting events. Within Sports Stadium, Facebook users will be able to see relevant posts from friends, media commentary with streamlined access to influencer's Sports Stadium pages, live play-by-play scores and statistics, and other relevant information related to specific sporting events.

And with the most popular single sporting event in the world only days away, Facebook hopes to use this year's Super Bowl 50 matchup as the perfect opportunity to introduce Sports Stadium to its legion of over 650 million sports fans. And though the analyst community won't be able to fully assess its traction until after the dust settles, Facebook's Sports Stadium should already have Twitter investors concerned.

Goliath takes aim at David
Make no mistake: Sports Stadium is only one of Facebook's recent maneuvers to encroach in Twitter's historic bastion as the world's go-to source for real-time news and analysis. Though it strives to be more, Twitter in many ways remains the world's chat room, and the inherent value of tapping into this use case certainly isn't lost on Facebook.

For Twitter, the competitive problem Facebook's moves present is one of audience. Though Twitter remains a strong source of analysis from influencers, the inherent social aspect of live events such as a sporting event is arguably weaker on the microblogging platform for the simple reason that users' friends and social network are likely less active on Twitter than on Facebook. We go to games with our familes and friends. And with the larger user base and more structural orientation toward interacting with close relations from afar, Facebook seems more ideally positioned to talk about a game with your friends and family. Said another way, with 1.6 billion active users versus Twitter's 320 MAUs, chances are that Twitter users are also Facebook users, not necessarily the other way around.

As such, Facebook incorporating aspects of Twitter's traditional strength of real-time sharing at Facebook's scale could arguably enhance the quality of the online sports experience (such as it is).

For Twitter, Facebook's move raises the risk of cannibalization from a larger, better capitalized competitor, the proverbial big fish swallowing a smaller minnow. Since Facebook's concerted efforts to tap into Twitter's core use case are a somewhat recent development, it isn't immediately clear how Twitter's audience will respond. Suffice it to say, though, if Facebook begins to erode the core content creators that drive Twitter's ecosystem, this could become an existential threat for Twitter.

For Facebook, this move serves as the most recent extension of the social media titan's efforts to introduce new tools onto its platform, which drives the company's monetization efforts. Over the past several years, Facebook has worked tirelessly to increase the amount of time users spend on its platform, which enables it to serve ever more ads to its users.

Only time will tell to what degree Facebook can eat into Twitter's mindshare for real-time discussion and analysis. However, especially with Facebook's ability to bring users' friends and acquaintances into the discussion, the introduction of Sports Stadium certainly has this budding Twitter bull worried. As they say, let the games begin.