Please ensure Javascript is enabled for purposes of website accessibility
Log In Help Join The Motley Fool
Free Article Join Over 1 Million Premium Members And Get More In-Depth Stock Guidance and Research
By George Budwell - Feb 7, 2016 at 7:11AM

The biotech remains a great buy, despite its worrisome start to the new year.

Gilead Sciences (GILD -1.32%), the reigning HIV and hepatitis C drugmaker, has seen its shares drop by over 14% so far this year, according to data provided by S&P Capital IQ: 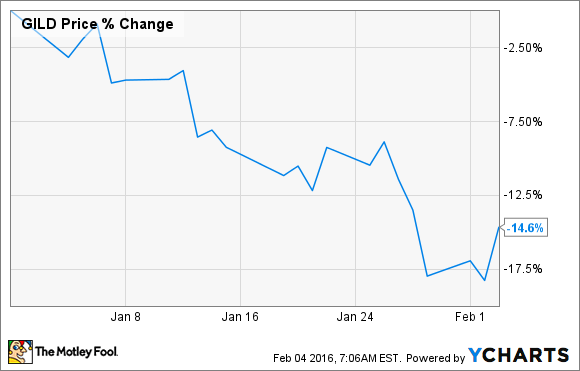 The odd part of this story is that Gilead is still generating healthy levels of bottom-line and top-line growth. For example, Gilead recently announced that its full-year product sales for 2015 jumped by 31% to $32.2 billion and its non-GAAP EPS grew by a staggering 56% year over year.

Of course, Wall Street is deeply concerned about the growing market share of AbbVie's (ABBV -0.63%) rival hep C offering Viekira Pak, and the forthcoming commercial launch of Merck's (MRK 0.68%) newly approved drug Zepatier -- along with the overall flattening of the hep C market inside the U.S. and parts of the EU. After all, these headwinds are projected to result in essentially flat sales of the biotech's hep C drugs Sovaldi and Harvoni within the U.S. this year.

Even so, Gilead's shares are starting to look exceedingly cheap at this point, implying that a bottom may finally be forming in this beaten-down biotech. For instance, the market is presently valuing Gilead at a paltry forward price-to-earnings ratio of 6.9.

With this in mind, let's take a deeper look at Gilead's prospects moving forward to consider if this top biotech stock has indeed hit rock bottom.

Gilead's hep C franchise isn't going to evaporate
While it's true that the biotech's hep C sales probably have peaked, the company is confident that it can rely on this particular franchise to generate enormous positive cash flows for years to come. After all, Gilead believes that there are over 3 million remaining hepatitis C patients within the U.S. who have yet to be treated.

The other underappreciated factor is Gilead's development of yet another major hep C product -- namely the all-oral, once-daily fixed dose combination of sofosbuvir and velpatasvir as a pan-genotypic hep C treatment. Based on the combo's impressive pivotal stage data, Gilead anticipates being able to launch this next-generation product in the U.S. in the second half of this year.

If approved, this new product would significantly add to Gilead's competitive moat in the ginormous hep C market, despite the fact that Merck is attempting to capture market share by undercutting Gilead on price.

Gilead has been busy creating deep value for shareholders
Unlike many biotechs that have been taking an aggressive approach to M&A to juice their top lines, Gilead has been far more cautious by striking a relatively small deal with Galapagos NV (GLPG 3.40%) for the experimental anti-inflammatory drug filgotinib and using its remaining cash flows to reinvest in itself.

Specifically, Gilead spent $10 billion on share repurchases in 2015, and recently authorized yet another $12 billion worth of share buybacks going forward. The biotech also plans on spending a noteworthy $3.2 billion to $3.5 billion on its clinical activities in 2016 -- which covers both its internal programs such as its oncology pipeline and the external partnership with Galapagos to advance filgotinib into late-stage testing for high-dollar indications such as rheumatoid arthritis and Crohn's disease.

The wild card here is if Gilead decides to accelerate its growth by acquiring a revenue-generating biotech or biopharma this year. Interestingly enough, Gilead's management did note on their fourth-quarter conference call that "the environment has shifted dramatically in our favor for doing those sorts of partnerships and whatnot," presumably referring to the industry's widespread downturn over the last few months. Basically, Gilead has the cash to take advantage of what is quickly turning into a target-rich environment.

Is Gilead worth buying right now?
Gilead has stable cash flows, great management, and a top-notch clinical pipeline. While those are all compelling reasons to consider adding this biotech to your portfolio, the bigger issue is that Gilead has a mountain of cash that it can use to its advantage right now.

Last year, some of Gilead's closest peers like AbbVie and Merck rushed headlong into the M&A scene when valuations were simply out of sight, putting the health of their balance sheets at risk in the process. By taking a more patient approach, Gilead can now get more bang for its buck, so to speak -- if it chooses to enter the M&A fray. If not, the biotech can still continue to dramatically reduce its share count and build out its product portfolio organically.

All told, Gilead remains a great buy for patient investors because of its commitment to creating value for shareholders and because of management's keen ability to keep the long-view firmly in mind.

George Budwell has no position in any stocks mentioned. The Motley Fool owns shares of and recommends Gilead Sciences. Try any of our Foolish newsletter services free for 30 days. We Fools may not all hold the same opinions, but we all believe that considering a diverse range of insights makes us better investors. The Motley Fool has a disclosure policy.