Please ensure Javascript is enabled for purposes of website accessibility
Log In Help Join The Motley Fool
Free Article Join Over 1 Million Premium Members And Get More In-Depth Stock Guidance and Research
By Sam Mattera - Feb 7, 2016 at 8:31AM

The Windows-maker could be about to deliver its final Lumia smartphone.

For the last four years, "Lumia" has been synonymous with Windows Phone. Former Finnish handset giant Nokia (NOK 3.00%) established the brand for its Windows-powered smartphones late in 2011, before ultimately passing ownership to Microsoft (MSFT 3.42%) in the 2013 deal that saw the Windows-maker acquire Nokia's entire handset business.

Now it could be about to vanish.

Last month, Windows Central reported that Microsoft planned to release just one more smartphone under the Lumia brand -- the mid-range Lumia 650. While the report remains unconfirmed, it wouldn't be surprising.

The success -- and failure -- of Lumia
Nokia established the Lumia brand to distinguish its Windows-powered smartphones from its Asha- and Symbian-powered handsets. From 2011 to 2013, Nokia released dozens of Lumia models at a wide variety of price points -- expensive flagships, including the Lumia 920, as well as budget offerings like the Lumia 520.

Within a few years, Nokia rose to dominate the market for Windows Phones. By November, 2013, Nokia's handsets represented 90% of the Windows Phone user base, according to a report from AdDuplex. Lack of enthusiasm for the platform on the part of other handset manufacturers obviously played a role, but Lumia's dominance cannot be understated.

Microsoft's deal to acquire Nokia's handset business finally closed in April, 2014. Since then, Microsoft has continued to make and sell Windows Phones under the Lumia brand -- seemingly the correct course of action, given its dominance of Windows Phone. Indeed, there's some evidence to suggest that consumers are more familiar with Lumia than they are Windows Phone -- data from Google Trends shows higher search interest in Lumia than Windows Phone or Microsoft's other hardware brand, Surface. 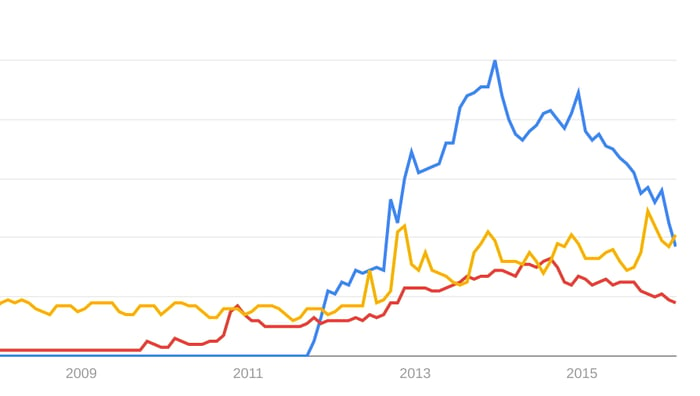 Still, Microsoft hasn't had much success. Windows Phone was never particularly popular, but the limited popularity it did have has receded in recent quarters. In the third quarter of 2013, Windows Phone accounted for 3.6% of the smartphones shipped globally, according to IDC. That fell to under 2% in the third quarter of last year. Microsoft wrote off the bulk of the Nokia acquisition last summer, and has been intentionally scaling down its smartphone offerings in recent months.

Last quarter, Microsoft's phone revenue fell 49% on an annual basis in constant currency. In its earnings slides, Microsoft attributed the decline to the "strategy change announced back in July 2015".

The Surface Phone?
The end of Lumia may not mean the end of Windows Phone, however. Microsoft could consolidate its smartphone efforts under its Surface brand instead. Rumors of a "Surface Phone" have been around for months. They gained new steam late last month, when a poster on Reddit discovered that surfacephone.com redirected to Microsoft's general Surface page.

The Surface remains a modest contributor to Microsoft's financials, but has enjoyed growth in recent quarters. Last quarter, Surface devices generated $1.35 billion, up more than 20% on an annual basis. With the Surface Pro 4 and the Surface Book, Microsoft is slowly establishing a brand of high-end, innovative Windows devices.

But the Surface Phone remains unconfirmed -- the Lumia 650 is far more real. Prolific, and reliable, tech leaker Evan Blass posted an apparent photo of the smartphone earlier this month. 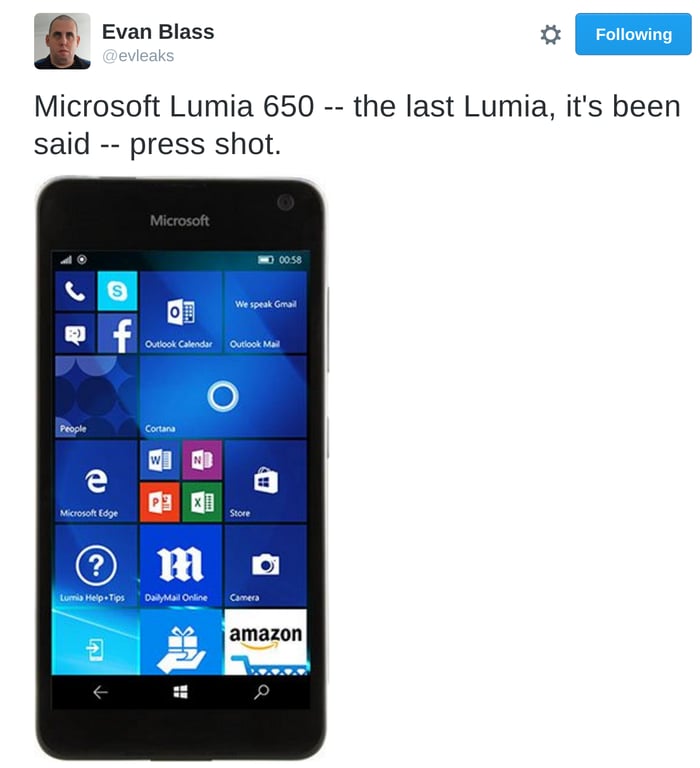 It may represent the end of a brand. The discontinuation of Lumia would fit within the context of Microsoft's recent moves. With Windows Phone more or less irrelevant, the death of Lumia should have almost no affect on Microsoft investors -- beyond being a sad reminder of its failure to capitalize on mobile computing.