With exchange-rate moves no longer providing a windfall, and with global sales down slightly, Toyota is finding profit gains the old-fashioned way: cost-cutting.

The big gains from exchange-rate swings may have passed, but Toyota is still boosting profits thanks to cost cuts and still-strong sales of profitable products like its RAV4 SUV. Image source: Toyota

Note that Toyota, like many Japanese companies, uses a fiscal year that begins on April 1. The quarter that ended on December 31 was the third quarter of Toyota's 2016 fiscal year. 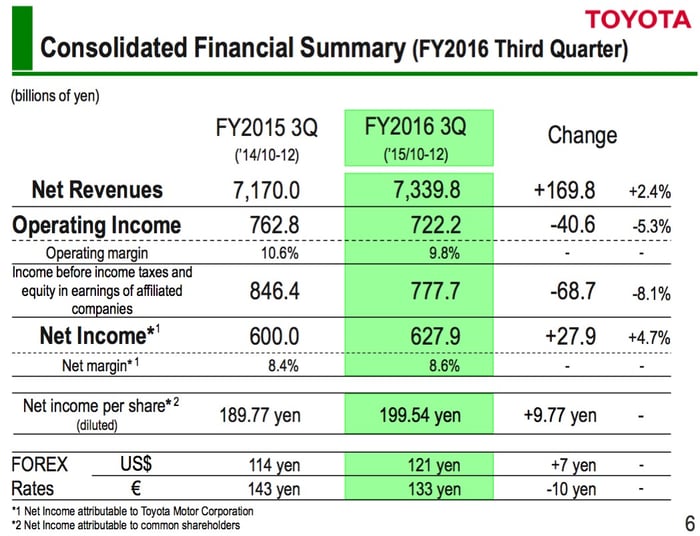 What happened during the quarter
For the last several quarters, Toyota has been able to post outstanding year-over-year profit gains that were powered in part by the depreciating yen. But now that the yen has stabilized versus the U.S. dollar (and gained a bit relative to the euro), that streak of big gains has come to an end.

In fact, Toyota's operating profits fell 5.3% from the year-ago period, as a 95 billion yen gain from CEO Akio Toyoda's global cost-cutting efforts was more than offset by 110 billion yen increase in "expenses". That included 20 billion yen in increased research and development costs, as Toyota stepped up its efforts to bring driverless-car technology to market. It didn't get any help from rising sales: Toyota's worldwide sales fell 2.2% in the quarter versus the year-ago period. 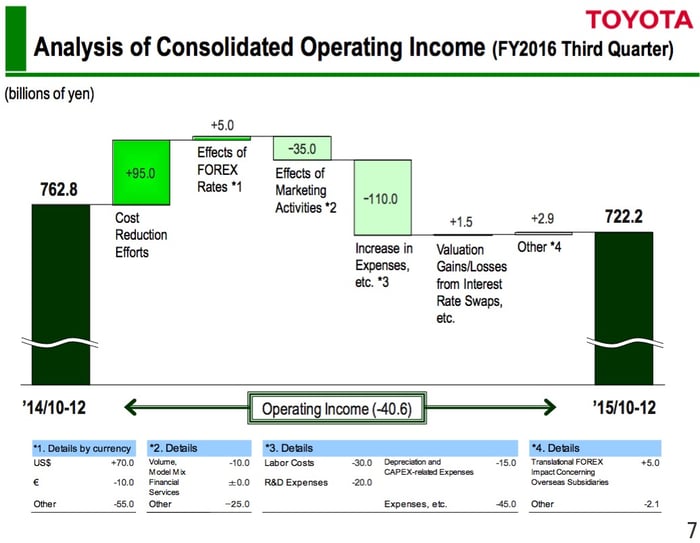 In Japan, where Toyota's sales fell slightly year-over-year, its operating income fell 7.5% to 392.7 billion yen, and its operating profit margin fell 1.4 points to a still-strong 10.2%. Toyota blamed the thinning margin on increased expenses, including that increased research and development spending.

In North America, sales rose about 2.3% during the quarter, but Toyota's operating income fell just over 15% to 141.8 billion yen. Its profit margin fell 1.3 points to just 5%. Toyota said that its income in North America decreased mainly due to "increased sales expenses". Or put another way, because it boosted its incentives as sales of its important sedan models have been slumping. (Those trends continued in January.)

The story was happier in Asia (outside of Japan). Toyota's sales were down 3.2% to 362,000 vehicles, but its operating profit rose 25.3% to 134.8 billion yen, with a margin of 9.9%. Toyota credited the gains to cost reductions and favorable regional exchange-rate swings.

In Toyota's "rest of the world" unit, which includes Latin America, Australia, Africa, and the Middle East, sales fell 8% to about 422,000 vehicles, and operating income fell 14.7% to 25 billion yen. Its margin of 4.5% was up 0.2 points from a year ago. The story here, at least as Toyota told it, is simple: Sales declined.

Looking ahead
Despite some revised exchange-rate assumptions, Toyota's forecasts for the full fiscal year that will end on March 31 remained otherwise unchanged. It still expects net revenue of 27.5 trillion yen, operating income of 2.8 trillion yen, income before income taxes of 2.98 trillion yen, and net income of 2.27 trillion yen.

Toyota's accounting chief, Tetsuya Otake, explained why the income forecast remained unchanged. "At 2.8 trillion yen [in operating income for the full fiscal year], our latest forecast remains unchanged from the previous forecast, having reflected both positive factors—such as progress in cost reduction and the weaker-than-expected Yen so far—and negative factors such as an expected increase in sales expenses and other expenses, " Otake said in a statement.