Investors in Amazon (AMZN 3.15%) are going through a lot of pain lately: Shares of the online retail giant are down by a staggering 25% year-to-date on the back of lower than expected fourth-quarter earnings and negative investor sentiment. The company is investing tons of money for growth, and this makes earnings quite volatile and hard to predict in the short term. On the other hand, Amazon continues consolidating its rock-solid leadership position in online retail, and the business is well on track to delivering explosive growth and increasing cash flows over the years ahead.

1. Undisputed competitive strength
Amazon is the undisputed global king in online retail, and it's also widening the competitive lead over eBay (EBAY 2.93%). Amazon produced $107 billion in sales during 2015, while eBay delivered $8.6 billion in revenue over the same period. Not only is eBay just 8% the size of Amazon in terms of sales, but Amazon is also growing at a much faster rate. Amazon announced a year-over-year increase in constant currency revenue of 26% during 2015, while eBay reported a much more modest increase in constant currency sales of 5%.

Amazon Prime is a powerful tool in Amazon's efforts to consolidate its competitive position and secure growth over the long term. The company does not disclose the exact number of Prime members, but in it latest earnings report, management said that global Amazon Prime membership grew 51% in 2015. According to estimates by Consumer Intelligence Research Partners, Amazon has 54 million Prime members in the U.S.

Prime members are remarkably loyal to the company, and they spend more money on Amazon purchases. Based on data from Consumer Intelligence Research Partners, members spend on average $1,100 per year in Amazon, while non-Prime customers spend on average $600 annually. You don't need to be a Wall Street wizard to understand how strong subscriber growth for Prime could be a huge driver for Amazon going forward.

2. Explosive growth potential
Online retail is rapidly stealing market share away from traditional brick-and-mortar stores, yet e-commerce still represents just 7.4% of all retail sales in the U.S. Everything indicates that e-commerce will continue delivering exceptional opportunities for growth in the years ahead, and no company is better positioned than Amazon to capitalize on them. 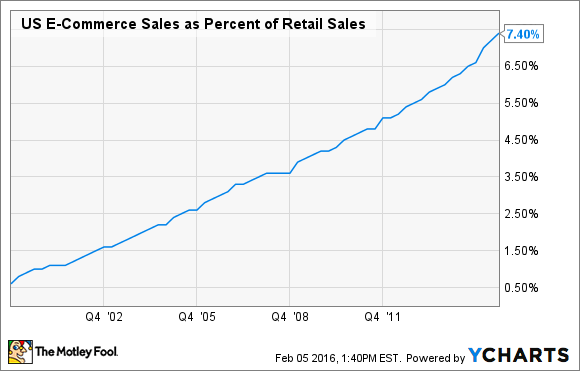 If we take a look at the retail industry as a whole, including both online retailers and traditional players, Amazon comes well behind Wal-Mart (WMT 0.86%) in terms of size. Wal-Mart remains the biggest retailer in the planet, with nearly 11,500 stores serving 260 million customers per week under 65 banners in 28 countries.

Amazon is only 22% the size of Wal-Mart in terms of annual sales, however, Amazon is still capturing most of the growth opportunities across the U.S. retail industry. According to estimates from Wells Fargo, Amazon accounted for more than 51% of U.S. retail industry growth in the fourth quarter of 2015, while Wal-Mart won only 7%.

Besides, Amazon's cloud computing segment, AWS, already accounts for 7% of its total sales, and it's growing at extraordinary speed. Sales in this segment grew 70% in 2015, reaching $7.88 billion. Chances are that AWS will continue growing at a faster rate than Amazon's online retail operations over the coming years, which should drive strong growth for the company as a whole.

3. Big and growing cash flows
Amazon is all about growth, and the company is investing heavily in areas such as technology, digital content, and its gigantic distribution network. This means profit margins are thin and volatile, but the business is still producing large and growing amounts of cash. Operating cash flow grew 74% to $11.9 billion in 2015, while free cash flow increased from $1.9 billion in 2014 to $7.3 billion last year. 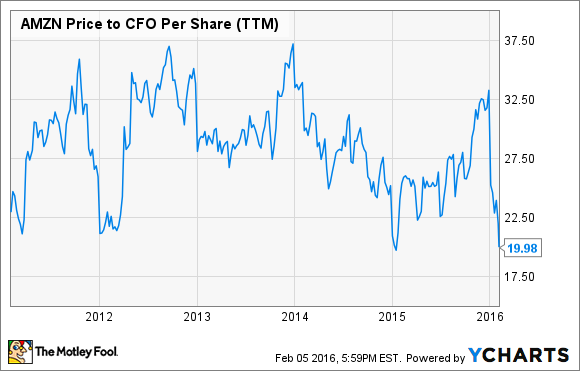 AMZN Price to CFO Per Share (TTM) data by YCharts

Amazon stock is currently trading at a price to operating cash flow ratio of around 20. This represents a premium versus most other companies in the market, but it doesn't sound excessive for such a growth powerhouse like Amazon. Interestingly, the current share price is near the low end of Amazon's valuation range for the last five years.