The upcoming earnings report from this video game company will tell investors if new titles are performing as well as expected.

The start of 2016 has been disappointing for Activision Blizzard(ATVI 0.91%) investors -- shares are down over 25% year-to-date in an otherwise quiet stretch for the company with no obvious news that would explain the weak trading. 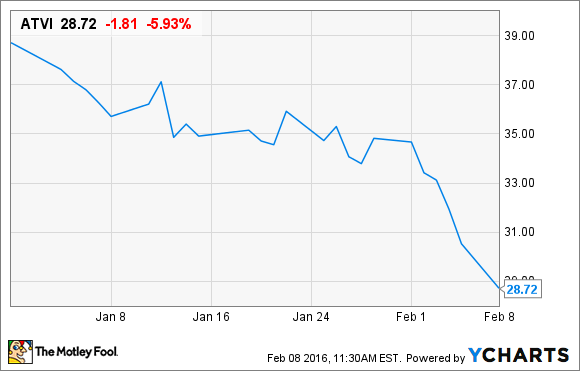 Activision Blizzard stock has declined along with the market and over fears that the global economy will slow, leaving less discretionary income for games. With fourth quarter results due on Thursday, we'll see if this business can continue to make the transition to digital games or if there is indeed a slowdown coming.

What management sees ahead
The first benchmark that fourth quarter results will be compared against is management's own guidance for the period:

These results would add to the $2.5 billion in revenue and $0.49 per share in earnings that Activision Blizzard had previously reported for the first three quarters of 2015 (on a non-GAAP basis).

The keys to watch
In the third quarter, Blizzard said that monthly active users were up 50% from a year ago, momentum the company hopes continued through the holiday shopping season. The company is leaning on the launch of Guitar Hero Live and Call of Duty: Black Ops III to drive both sales and engagement.

Part of the company's improved performance of late has been due to what Activision Blizzard calls a year-round engagement model rather than just a one-time video game sale. That model has helped drive digital revenue to 67% of the top line last quarter on a non-GAAP basis -- look for that digital transition to take hold further if engagement in new games grows.

The King Digital (KING.DL) acquisition will also be a topic of discussion, both for good and bad. The company is one of the leaders in mobile games but its reliance on the Candy Crush line of games for revenue made it a high-risk acquisition with a $5.9 billion price tag. Investors will want to know what the plans are for titles beyond Candy Crush, and there may not be a clear answer yet.

Another product line where investors will want to see progress is in new digital platforms like Apple TV, where Skylanders and Guitar Hero Live debuted. If Activision Blizzard can exploit new distribution platforms, it'll reduce dependence on traditional consoles and PC software that could prove to be platforms of the past as new options change the market. Being a pioneer in new digital platforms could prove to be a profitable move if the company can gain traction heading into 2016.

Can Activision Blizzard continue earnings growth?
At the end of the day, the growth in active users and the move to digital sales are really just an effort to expand the gaming market, increase margins, and grow earnings. Activision Blizzard has been very successful doing that over the last few years and looks to continue that trend in the fourth quarter. Despite the drop in shares recently, I think that fundamentals will prove to be strong again, but we'll see just how strong when fourth quarter results are released on Thursday.