U.S. stocks are lower on Monday, with the Dow Jones Industrial Average (DJINDICES:^DJI) and the S&P 500 (SNPINDEX:^GSPC) down 2.13% and 2.16%, respectively, at 1 p.m. ET. After plummeting by nearly 44% on Friday, shares of professional social network LinkedIn are trading roughly flat.

This is what pain looks like for an investor: 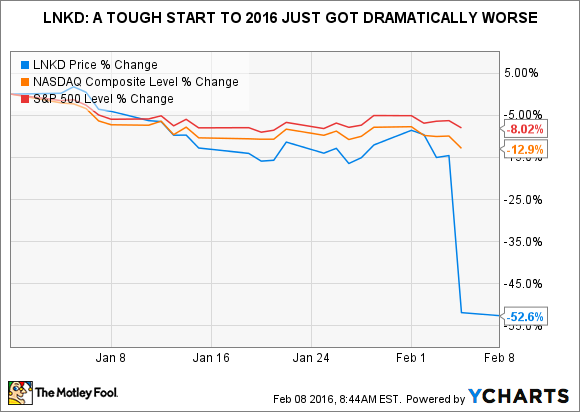 Shares of LinkedIn have been cut in half since the beginning of the year. Most of that decline occurred on Friday, as the graph above clearly illustrates. The magnitude of that daily decline is enough to test even the most steely nerved long-term investor.

Note, however, that even prior to Friday's bloodletting, the stock was underperforming both the S&P 500 and the technology-heavy Nasdaq Composite Index. After a historically challenging start to the year for stocks, investors (traders, really) are in no mood to support stratospheric share price multiples when they are presented with evidence that raises any doubt whatsoever about the quality of growth prospects for a "story" stock.

Which is exactly what happened when LinkedIn announced revenue guidance for the current quarter and fiscal year that was far below the prevailing consensus estimates. As Citigroup's Mark May wrote, "even considering [management's] history of conservatism, guidance implies a meaningful deceleration in revenue growth to the 20-30% range from 35-40% recently."

Growth in a range of 20% to 30% is not calamitous (particularly in an economy growing at roughly 2% in real terms), but any discussion of this type must refer to the price investors are paying for that growth. Given today's stock price action, it's highly likely that LinkedIn was overvalued at yesterday's close. In fact, I'd go so far as to say that it was probably overvalued even without the benefit of the information contained in Thursday's earnings announcement.

Nevertheless, when a stock loses 44% of its value in a single day, it sets off this columnist's contrarian/ value-seeking antennae. All the more so when the stock belongs to a high-quality business (e.g. one that boasts a durable competitive advantage, which LinkedIn appears to possess).

Indeed, the first shareholders to jump ship are likely to those who have a weak appreciation for (or tenuous grasp of) intrinsic value. In fact, the notion of intrinsic value does not even figure in the framework of a significant community that includes momentum "investors" (the term can only be used loosely here).

Another group of investors face institutional constraints that make it difficult to continue holding a position that has been decimated. When people make buying and selling decisions on the basis of other-than-economic considerations, it introduces a potential distortion in the pricing of the shares.

When such a constituency is overwhelmingly moving in the same direction, the distortion can be significant and open up a gap between price and intrinsic value. At more than 32 times next twelve months' earnings-per-share estimate, according to data from Bloomberg, LinkedIn's share still don't look cheap, but a 20% to 30% growth rate in revenues can contribute to shrinking that multiple pretty quickly (particularly in the case of a business with high operating leverage like LinkedIn).

It may be small comfort for those who owned the shares going into last Friday, but expected returns are significantly higher from current levels than they were at yesterday's closing price. Value-driven investors with a tolerance for volatility may want to begin plugging into this social network.