Please ensure Javascript is enabled for purposes of website accessibility
Log In Help Join The Motley Fool
Free Article Join Over 1 Million Premium Members And Get More In-Depth Stock Guidance and Research
By Evan Niu, CFA – Feb 8, 2016 at 9:15AM

Instead of trying to compete with full-featured smartwatches, maybe Fitbit should stick to what it knows best: stand-alone fitness trackers.

For the past couple of years, Fitbit (FIT) has been working very hard to move up-market. For the most part, it's been succeeding. Average selling prices have been steadily marching higher, and the higher-priced Charge, Charge HR, and Surge continue to drive revenue (79% of sales in the third quarter). 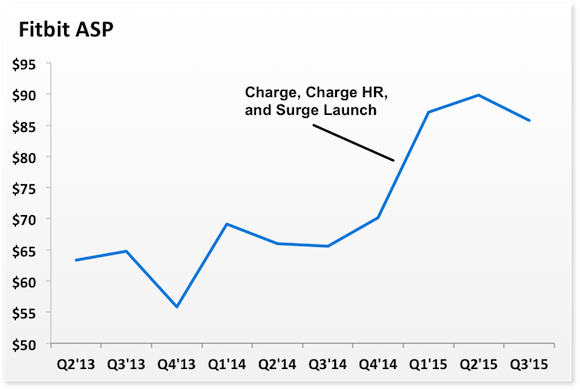 But then something interesting happened.

Investors were not impressed with the new $200 smartwatch, even as it underscored the company's focus on moving up-market to defend itself from Apple (AAPL -1.51%) Watch. Apple is already nipping at Fitbit's heels, grabbing an estimated 18.6% wearables market share in the third quarter, according to IDC. Fitbit still leads with 22.2%, but the Mac maker is catching up -- and fast.

Considering the market's reaction, you might think that investors don't have a lot of confidence in Fitbit's ability to continue competing in high-end devices. With high-end devices, it's much more critical to constantly iterate and release update products at regular intervals. This is something that Apple has down pat, but is relatively new to Fitbit.

Enter Alta
Just last week, Fitbit then went and unveiled its new Alta fitness tracking wristband. Like Blaze, the Alta is meant to focus very heavily on fashion and aesthetics. While subjective, I think the Alta accomplishes this much better than the blocky looking Blaze. Alta is a lot sleeker and looks a lot nicer in many ways. The new device is priced at $130.

That $70 price differential is pretty important, because it means the Alta and Blaze are positioned in very different segments of the market. Alta is not trying to compete with full-featured smartwatches. Instead, it represents Fitbit doubling down on one of its greatest strengths: stand-alone fitness trackers.

Alta is also important because it consolidates the product lineup in a way. Not only is it a new offering, but it combines the best of both Flex and Charge. It's thinner, like the lower-end Flex, but is more comparable to Charge in terms of features, which also costs $130.

Robert Baird analyst William Power agrees, recently reiterating an outperform rating on Fitbit alongside a $30 price target. The analyst is fairly bullish on Alta, believing that it can reinvigorate sales momentum while also mitigating concerns around Blaze's product positioning.

Which one will do better?
Simply put, the Blaze doesn't appear to be a very promising device, while the Alta looks like it has a lot of potential. This inevitably begs the question: Should Fitbit really continue trying to move upmarket to compete with the likes of Apple Watch?

People expect full-featured smartwatches to offer platform support for third-party apps, which Fitbit can not and will not operate viably. But Fitbit does have a very strong core audience in activity trackers and consumers that emphasize fitness-oriented wearables. Maybe it should stick to stand-alone devices like Alta. To be clear, the Alta still represents the high end of the fitness tracker market (much like Charge and Charge HR), just not the high end of the wearables market.

Of course, only the market will answer the question. But I think the Alta will end up selling a lot better than the Blaze.