Please ensure Javascript is enabled for purposes of website accessibility
Log In Help Join The Motley Fool
Free Article Join Over 1 Million Premium Members And Get More In-Depth Stock Guidance and Research
By Brian Feroldi - Feb 8, 2016 at 11:22AM

Bluebird's stock get caught up in January's biotech meltdown.

What: January was a month to forget for investors in bluebird bio (BLUE 1.64%), a clinical-stage biotechnology company focused on gene therapy. The stock shed more than 34% of its value during the month, according to data from S&P Global Market Intelligence. Bluebird bio was far from alone in its misery, as its direct competitor Bellicum Pharmaceuticals (BLCM -0.69%) also tanked during the period. 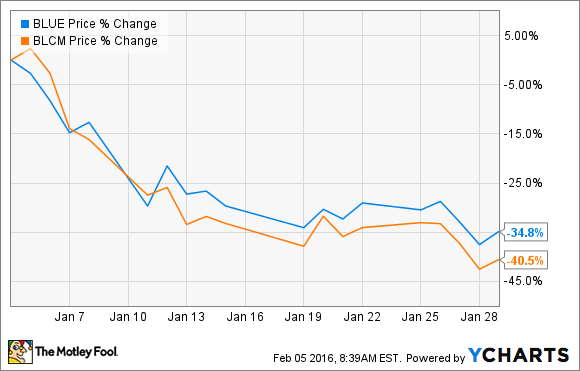 So what: While it's likely that bluebird's stock was simply caught up in January's biotech meltdown, shares did fall drastically after the company released its J.P. Morgan Healthcare conference slides early, causing traders to panic. What caught the market off guard was that bluebird said that it wouldn't be providing a midyear clinical update on LentiGlobin BB305, its lead product candidate, until the next American Society of Hematology meeting in November. In each of the past two years, management shared a clinical update with investors in June, so the news of an additional five months of radio silence worried the market.

Bluebird's CEO Nick Leschly later explained that the LentiGlobin trials are now testing the therapy's durability, so the company felt that it didn't make sense to share new data until it was complete. On hearing his explanation, shares partially recovered.

Now what: The market has been steamrolling both bluebird bio and Bellicum Pharmaceuticals stocks for several months now. Shares of each are down more than 60% from their summertime highs. 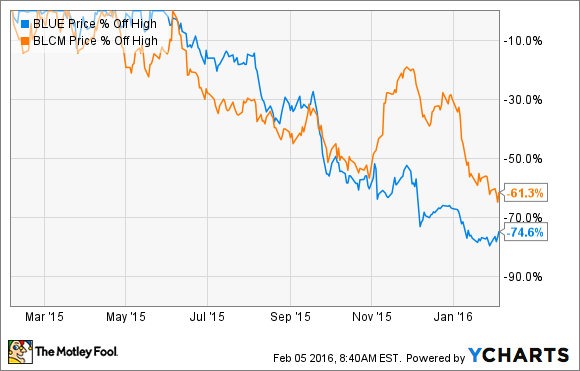 Like bluebird, Bellicum Pharmaceuticals has a product candidate called BXP-501 that's being researched as a potential treatment for beta-thalessmia, and since the company is also firmly in the clinical stage, its stock often trades in tandem with bluebird's.

One could argue that the drubbing to bluebird's shares has been appropriate. During its last clinical update on LentiGlobin BB305, new data showed that it might not be the cure many investors were assuming it would be. The updated information showed that LentiGlobin might only be an effective treatment for patients with milder cases of beta-thalassemia as opposed to an outright cure regardless of severity, causing investors to believe that its market potential might be more limited.

While that theory might be true over time, investors should remember that bluebird currently has plenty of cash to fund itself in 2018, so it has plenty of time to continue advancing LentiGlobin down the clinical pathway. Holding tight until we get updated information on LentiGlobin in November is likely to be the best move for now.

Brian Feroldi has no position in any stocks mentioned. The Motley Fool recommends Bluebird Bio. Try any of our Foolish newsletter services free for 30 days. We Fools may not all hold the same opinions, but we all believe that considering a diverse range of insights makes us better investors. The Motley Fool has a disclosure policy.