Not every growth company is necessarily a risky bet.

High-growth companies can be spectacularly profitable investments. On the other hand, companies with superior growth potential are sometimes too risky for many investors. If you're looking for investment opportunities offering both powerful growth prospects and fundamental soundness, our contributors believe you should take a look at these names.

Andres Cardenal: Expedia (EXPE 1.66%) is the leading player among online travel agencies in the United States. The company comes well behind competitor Priceline Group in international markets, but Expedia's more domestically oriented business can be a plus for investors who want to keep risks under control and avoid too much exposure to global currencies' volatility.

The business is clearly firing on all cylinders. The company registered a big 21% increase in gross bookings year-over-year during the third quarter, and revenue in constant currency jumped by a strong 27%. Expedia added 14,000 properties to its global supply portfolio, which has a total of 271,000 hotel rooms and other locations. This represents a 29% increase versus the third quarter in 2014. 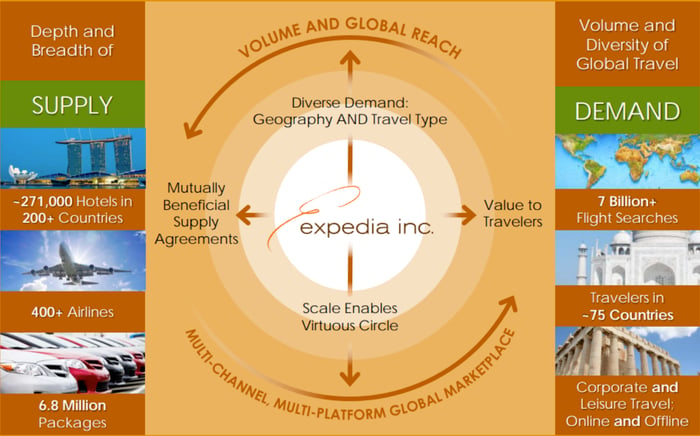 Management calculates that the online travel industry is a market opportunity worth nearly $1.3 trillion, and Expedia still owns relatively small 10% of that market. The industry will most likely continue growing at a nice rate, and Expedia has considerable room for market share gains in the years ahead. This bodes well for the company when it comes to evaluating its long-term potential for sustained growth over the years.

Brian Feroldi: Biotech stocks are probably the last place you'd think to look for an investment that doesn't require constant attention, but Celgene (CELG) isn't just any old biotech. Celgene is already hugely profitable thanks to its strong lineup of top-selling drugs, which include multiple myeloma drugs Revlimid and Pomalyst, its breast, pancreatic, and lung cancer drug Abraxane, and its anti-inflammatory pill Otezla. As each of these drugs win new labeling and expand into additional geographies, Celgene's top and bottom line will continue to swell.

Beyond its current crop of billion-dollar drugs, Celegne has an exceedingly strong pipeline, which took a significant step forward in 2015 with the $7.2 billion acquisition of Receptos. That move added a next-generation relapsing multiple sclerosis drug called Ozanimod to its pipeline, and its potential looks huge. Analysts believe that Ozanimod will ultimately generate peak sales of more than $4 billion and also will help to diversify Celgene's lineup further.

Taking it all together, Celgene believes that its revenue will grow at an average annualized rate of 19% between now and 2020 and the company's regular share repurchase program mixed with some margin expansion will allow profits to grow by an even faster 23% per year. That's strong growth for a company of Celgene's size, and if its can deliver on those promises, then its earnings per share in 2020 will grow to more than $13. That makes today's share price of roughly $100 look quite compelling. Investors who want a high-growth stock without feeling they need to watch a company's every move should considering giving Celgene a closer look.

Steve Symington: I'll admit that Under Armour (UAA 2.04%) looks perpetually expensive based on most traditional metrics. But as a longtime shareholder of the athletic-apparel specialist myself -- and despite the market's propensity to aggressively react one way or the other to its quarterly earnings reports -- I've learned not to fret over Under Armour's ability to grow into its lofty valuation.

After all, last quarter marked Under Armour's 25th consecutive quarter of achieving at least 20% net revenue growth in its largest product category of apparel, while overall revenue jumped 31% year over year to $1.17 billion. And though Under Armour's growth will inevitably decelerate as it builds from a larger base each year, it won't be by much; at Under Armour's 2015 Investor Day last September, the company accelerated its long-term goal to reach $7.5 billion in revenue by 2018, marking 25% compound annual growth from 2014 revenue of $3.1 billion, and a nearly 90% growth from last year's revenue of $3.96 billion.

Sure enough, management's latest guidance calls for revenue in 2016 to climb 25% to $4.95 billion, driven by continued broad-based growth from apparel, footwear, accessories, and most recently, its bolstered presence in the Connected Fitness space through both mobile apps and its new line of fitness-centric hardware products. That's also not to mention the fact that even after climbing 70% year over year last quarter (85% on a currency-neutral basis), international revenue still represented only around 12% of Under Armour's total last quarter, leaving it with a mouthwatering runway for growth as it works to replicate its domestic success with consumers around the globe.

In the end, I'm convinced Under Armour is a perfect stock for those willing to buy and patiently watch as it continues to fulfill its promise for aggressive growth in the coming years.