The midstream giant continues to produce gobs of cash, and then do very smart things with it.

Since reporting fourth-quarter and full-year 2015 earnings on January 29, shares of midstream and refining giant Phillips 66 (PSX 0.11%) are down almost 7%. The refining giant posted profits that came in ahead of expectations in the fourth quarter, but earnings for the quarter and full year came in below levels from 2014.

Nonetheless, Phillips 66 is well-positioned to be a market-crushing investment for years ahead, even if -- maybe especially if -- the current energy downturn lasts longer than anyone expects. Here are three key reasons why now is a great time to buy shares of Phillips 66.

1: One important way Phillips 66 is different
Phillips 66 doesn't drill for oil or natural gas. Because of this, it has much less exposure to commodity price swings than integrated oil companies like ExxonMobil Corporation (XOM -1.54%), and oil and gas producers like ConocoPhillips (COP -1.27%). And the bottom line is, producers -- or companies that operate a production segment -- are hurting with oil and gas prices down so low.

ExxonMobil reported 2015 earnings recently, announcing that profits were down 50% in 2015, and the losses had accelerated in the fourth quarter, falling 58% from Q4 of 2014. The biggest driver behind the company's declining profits was, by far, its upstream business segment, which is its oil and gas production business. In 2014, ExxonMobil generated $32.5 billion in profits, with $27.5 billion of that coming from upstream operations. In 2015, the company's net income was $16 billion, and with the upstream segment generating $8.1 billion, down a massive 70% from the year before.

ConocoPhillips, a stand-alone producer, is really feeling the pinch of oil prices. The company reported a net loss of $4.4 billion in 2015 after a $6.9 billion profit in 2014. Even when adjusting earnings for one-time items, including noncash asset writedowns, the megaproducer still lost $1.7 billion last year.

With the ongoing oil-price environment looking like it could last for a while, ConocoPhillips has been forced to take major steps to cut costs. Operating expenses were 14% lower last year than in 2014, it spent 40% less on capital projects, and sold $2 billion in assets; but that still hasn't been enough for the company to make money. Because of this, the company just announced a 75% reduction in its dividend as a step to help it preserve cash.

Phillips 66, however, buys oil and gas, and can actually benefit when commodity prices are down. But even when there's not a benefit, the company isn't subject to the kinds of major losses that producers are.

2: Cash flows from slow-growth refining invested in better opportunities
Phillips 66's refining and marketing business is the company's cash cow, and likely to remain so for years to come. It's also the part of the business that would generate less-attractive capital returns if the company invested to grow it.

However, demand for the products made from the company's petrochemicals operations -- things like fertilizer, rubbers, plastics, and synthetic fabrics -- have huge consumer and industrial demand that will only increase as the planet's population and middle class grow in decades to come.

At the same time, this increased demand is one of the factors that's driving demand for natural gas, of which the U.S. has huge reserves. So Phillips 66 is making significant investments in expanding its midstream pipeline and storage operations to help connect new natural gas production to the country's pipeline infrastructure.

Demand for natural gas extends far beyond chemical manufacturing, of course, as it continues to offset coal in power generation, and is on track to see huge expansion in U.S. export as more facilities come online during the next decade, driven by huge global-demand growth for cheap energy.

3: Disciplined management maintaining strong balance sheet, taking owner-friendly actions
Since it was spun out of ConocoPhillips in 2012, Phillips 66's management has increased the dividend by 180%, bought back 15% of shares outstanding, and invested billions of dollars in expanding its chemicals and midstream businesses.

In short, management gets consistent double-digit returns on invested capital, and pays out a reasonable and sustainable portion of earnings in dividends: 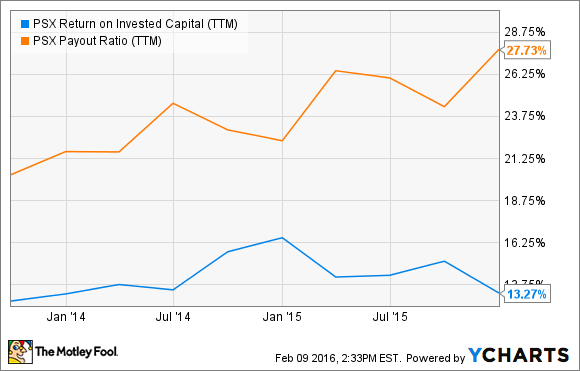 At the same time, the balance sheet has remained strong. The company has nearly $5 billion in cash, and its $8.9 billion in debt is extremely low cost. In the most-recent available data, the company paid just more than 3% annualized in interest expense on its debt.

Looking ahead
It's impossible to predict what the market will do in the next few months, but for the long term, Phillips 66 is well-positioned to turn into a market-beating investment. Shares are down 18% since December, but the quality of the business remains strong, and management is doing the right things to invest in long-term opportunities.

If you're looking for an unfairly beaten-down energy investment with big long-term potential, Phillips 66 should be at the top of your short list.