Shares in Union Pacific (NYSE:UNP) are down over 40% in the past year and have hit several 52-week lows. The latest quarter won't end the disappointment. The depressed energy market significantly pressured fourth-quarter earnings, as the company has been forced to cut jobs and temper expectations for the coming quarters.

Let's examine three key takeaways for investors to focus on and their implications going forward.

1. Total volumes decreased 9% in the quarter
The massive drop in crude oil, fracking sand, and coal shipments over the past year forced Union Pacific to cut over 3,000 jobs. The company increased prices, but it still couldn't offset the volume decline enough to beat expectations, coming in at $1.31 per share in earnings for the quarter versus the consensus average of $1.43 per share. 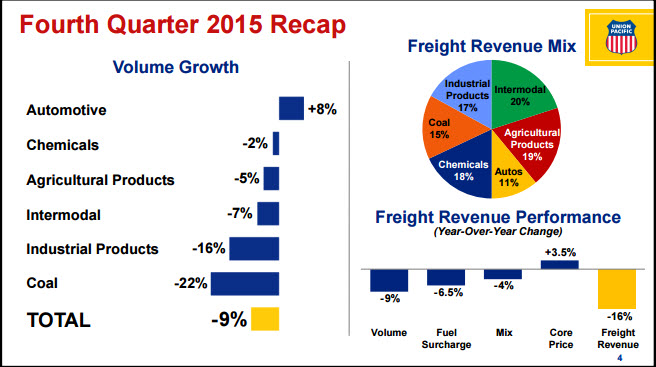 Freight revenue dropped 16% year over year, with volumes declining in all business groups except for automotive shipments.

However, even with the significant drop-off in volumes, the company was able to increase margins on the back of efficiency efforts.

The decline in crude-oil volume shows the potential production coming offline as E&P producers in the U.S. begin to pull back on drilling and production. The good news is that taking production off the market sets the stage for higher prices, so we can look for things to improve here down the road. What to look for in the coming quarters
Warren Buffett once said that if he were allowed to pick any figures to know how the economy was faring, he'd pick railcar traffic and truck tonnage moved. So let's see how those metrics look. As you can see from the figure below, the average weekly railcar loads have fallen precipitously the last two months. Railcar traffic currently stands at its lowest levels in the last three years. 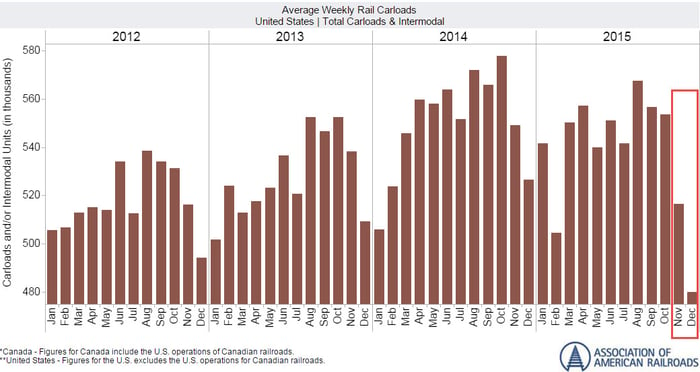 With the volume slowdown in the railroad industry, it appears we're seeing potential headwinds in the overall economy right now. Low energy prices are likely to pressure earnings for the coming quarters, barring a sudden price surge. Total volumes are expected to come under pressure, and management says it expects coal to continue its decline. The drop in energy prices will shut in a significant amount of U.S. production, and we've seen major oil and gas companies cut back billions in capex over the past year, a trend that's expected to continue into 2016.

Still, there were some positives to the quarter. The company was able to increase core pricing again, which helps improve the company's moat and great business dynamics. And it was able to do so in the midst of a significant decline in volume. There's something to be said for that in this kind of environment.

Investor takeaway
As the U.S. population continues to grow, more food will be consumed, more people will be buying cars, and more people will need energy. I'm willing to bet that goods will continue to be moved across the U.S. over the next 50 years by rail, and Union Pacific is strategically positioned to benefit from these long-term tailwinds.

Share prices look appealing at current levels, with a P/FCF of 18.93 and a dividend yield of 3.19%. Long-term investors should welcome the pullback in shares as a good entry point to acquire shares in a great company.

The drop in energy-related shipments may be something we need to get used to for the foreseeable future, with prices at such depressed levels. However, that point shouldn't take away from the company's long-term growth profile, and one bad quarter doesn't make or break a strong company anyway. Sometimes they provide excellent opportunities for long-term investors. Union Pacific may well be one of those cases.