Please ensure Javascript is enabled for purposes of website accessibility
Log In Help Join The Motley Fool
Free Article Join Over 1 Million Premium Members And Get More In-Depth Stock Guidance and Research
By Daniel B. Kline - Feb 9, 2016 at 10:15AM

The company is playing the waiting game while it awaits approval for its planned acquisition of Time Warner Cable and Bright House.

Charter Communications (CHTR 0.77%) saw its year-over-year loss double in Q4, 2015, but if you subtract the costs related to its pending acquisition of Time Warner Cable (NYSE: TWC) and Bright House, then the company would have actually made money.

The soon-to-be-giant cable and Internet company reported a $122 million Q4 loss, $1.09 per share, compared with a loss of $48 million, or $0.44 a year earlier. But it also noted that the "net loss was driven by $231 million of interest expense related to the financing of Charter's pending transactions with Time Warner Cable and Bright House."

In addition to posting a loss, albeit from one-time expenses, Charter did report some positive news. The company added video customers -- 33,000 in Q4 and 11,000 for the full year -- for the first time in a decade. That's encouraging news that closely mirrors the small gains or minimal losses being posted by the company's cable rivals (including a yearly gain by TWC of 32,000 pay-TV customers).

These numbers suggest that cord cutting, while still a major threat to the industry, is not as absolute or inevitable as it once seemed. Charter executives discussed the cable business, its pending deal for Time Warner Cable, and Bright House, and much more during its Q4 2015 earnings call.

The company takes credit for the video gains
Charter's posting of a slight gain in pay-TV customers for 2015 is not unique in the industry. It's in line with the cable companies that reported before it, but CEO Thomas Rutledge said that he believed the company's efforts to improve its video offering led to the increase.

"Driving that growth is an improved video offering with better pictures, more HD than satellite, video on demand, and interactive guide functionality on every TV outlet, combined with high-quality, in-sourced, and U.S.-based customer service, all in an easy-to-understand pricing and packaging structure, which makes our products competitive well beyond the point of sale," he said, according to Seeking Alpha's transcript of the earnings call.

That's true in a sense, because not doing those things or offering those products probably would have led to a decline, but really the company just followed industry-standard improvements. The things cited by the CEO do matter, but the gain in video customers probably comes from cord cutting slowing down in a broad sense more than from any actions Charter took. 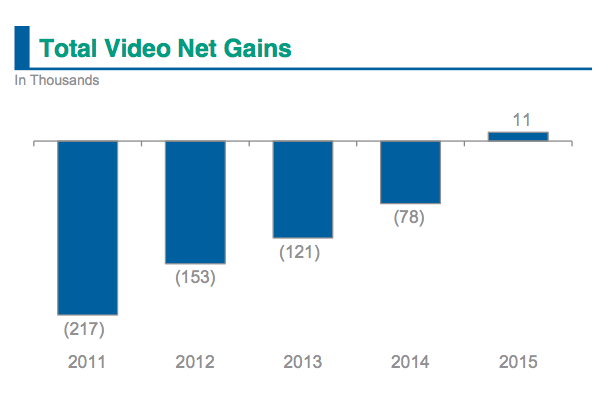 Charter is hiring
Rutledge said the company has made a conscious decision to not use contracted offshore labor. As a result, the company has hired "7,000 people to help us support our products with customer service provided by our own people." He added that the new company, assuming the Time Warner Cable and Bright House deals are approved, will require "about 20,000 more people to do the same, proportionally."

According to the CEO, the company handles 90% of its customer-service calls in-house with U.S.-based personnel. In addition, 95% of the company's service trucks are Charter owned and operated.

"As we train and manage our own employees, we're creating a skilled labor force that is executing higher-quality service transactions with our customers when we sell and provision, install, answer billing questions, or handle repairs," he said.

The deals are moving forward
Everything about Charter changes if the TWC and Bight House deal passes. Rutledge detailed how the company was preparing become New Charter -- which will be the country's second-largest cable company -- while also not taking approval for granted.

"We've made good progress in working with the regulators and other stakeholders financing the transactions and planning the integration," he said. "We've met the closing conditions for franchise approvals, and at the federal level we continue to work closely with the FCC and DOJ to make sure they have the information they need, and we remain hopeful that the process can be completed in March."

The CEO noted that the New York State Public Service Commission has approved the deal, while the company is waiting on required approvals from New Jersey, Hawaii, and California.

"We will continue to work with state authorities to achieve a faster timeline, as we have 90,000 employees waiting to become part of the new company, and we don't want to delay the significant consumer benefits that our transactions deliver," Rutledge said.

Prices are not going up -- probably
Charter had small price increases for most of its users in 2015, but during his opening remarks, Rutledge made reference to flat pricing. He was pressed on the issue during the question-and-answer section of the call and made the company's plans clear.

"There are no material rate increases in 2016 planned," he said.

That's not a promise that no customers will see increases, but it suggests that most won't, or if they do, they will be small.

Daniel Kline has no position in any stocks mentioned. He is writing this while stuck in his home during the first major snowstorm of the year in Connecticut. The Motley Fool has no position in any of the stocks mentioned. Try any of our Foolish newsletter services free for 30 days. We Fools may not all hold the same opinions, but we all believe that considering a diverse range of insights makes us better investors. The Motley Fool has a disclosure policy.