Chipzilla probably isn't a full generation ahead of the foundries in terms of transistor performance.

Over the last several years, there has been quite a lot of brouhaha around the naming of the chip-manufacturing technologies that Intel (INTC -3.51%) and contract chip manufacturers like Taiwan Semiconductor Manufacturing Co. (TSM -6.37%) put out.

The controversy began when TSMC and Samsung (NASDAQOTH: SSNLF) made it clear that in advancing from their technologies named "20-nanometer" to "14/16-nanometer," they would put their focus on developing a new transistor structure known as a FinFET, forgoing the typical area reductions that typically come with each generation.

Intel, on the other hand, chose to shrink in going from its 22-nanometer technology to its 14-nanometer as it rolled out its second generation FinFET transistors.

This has led some, usually Intel bulls, to proclaim that TSMC's and Samsung's respective 16nm/14nm processes are equivalent to Intel's 22-nanometer process. This is flat-out false. Here's why.

Back to basics
Although it is true that Intel shrunk in going from 22-nanometer to 14-nanometer, it's important to realize that Intel had actually trailed the competition in terms of transistor density at similarly named manufacturing technology nodes.

Indeed, this is something that had been widely talked about, but Intel didn't bother to publicize this until it revealed details of its 14-nanometer tech (which would be decisively ahead of the foundry 14/16-nanometer technologies). 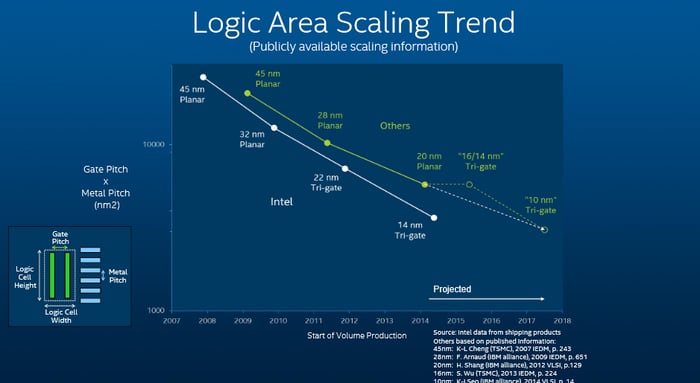 Notice from this Intel chart, the company admits that its 32nm technology was behind the comparable 28nm offerings in terms of gate pitch-by-metal pitch (a proxy for density). Same thing with Intel's 22nm relative to foundry 20nm offerings. Only at the 14/16-nanometer node did Intel have a lead over equivalently named technologies from the competition.

So, while it is true that Intel's 14nm does have a density advantage over foundry 14/16-nanometer offerings, the foundry offerings are still ahead of what Intel had at 22nm, by virtue of the fact that at the 20/22nm generation, Intel was actually behind.

Hey, what about transistor performance?
One thing that Intel used to like to brag about (not sure if they're still doing so these days) is that they are on their second-generation FinFET while the competition is on its first-generation FinFET. The implication here is that Intel's 14-nanometer transistors from a performance perspective are a full generation ahead of what the foundries are offering.

According to conversations with a source familiar with the technologies, Intel's 14nm transistors are ahead in all performance metrics relative to the foundries' except for parasitic capacitance. This, the source tells me, is a byproduct of the fact that Intel's transistor fins are packed more closely together than those on the foundry 14/16nm offerings.

So, while I do believe that Intel has a transistor performance advantage over the competition, the images of the Samsung 14nm FinFETs that are floating around on the Web suggest that Samsung's fins look more like Intel's 14nm fins than the 22nm fins that Intel put into production in late 2011.

The performance delta is unlikely, then, to be a full generation between Intel's tech and the foundry tech in mobile and other applications that don't need very high CPU frequencies (I think foundry 14nm/16nm transistors would have a very hard time driving the >4GHz speeds that Intel's 14nm seems to handle without issues).