Guidance for 2016 suggests that a corner is turning for this industry Goliath.

After years of struggling to offset crashing sales tied to the loss of patent protection on its megablockbuster drug Lipitor, Pfizer's (PFE 3.62%) management reports that the company's sales will finally stop falling, and start growing again this year. Will this be the year that Pfizer turns it around? Read on to find out what's behind Pfizer's improving outlook.

Taking a big hit
With peak annual sales of roughly $13 billion, Lipitor was the planet's best-selling drug in the 2000s; however, sales of Lipitor plummeted after the drug lost patent protection in November 2011. Last year, Pfizer recorded U.S. Lipitor sales of just $161 million, and global Lipitor revenue of only $1.7 billion.

Overcoming that massive headwind proved to be too much for the company. As a result, Pfizer's sales have dropped from more than $67 billion in 2011 to less than $50 billion in 2015. 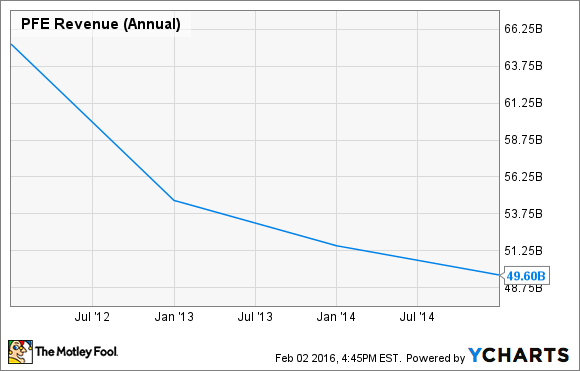 Turning a corner
In a bid to protect its profits, Pfizer embarked on a major restructuring to cut costs that included selling its nutrition business, and spinning off its animal health business. Those decisions have cut Pfizer's SG&A expenses from more than $19 billion to less than $15 billion. With the company forecast to deliver revenue growth again, the benefit of leveraging rising sales against lower costs should lead to higher profit in the coming years.

Assuming currency exchange rates remain similar to last year, Pfizer management believes that the company's revenue will improve to between $51.3 billion and $53.3 billion this year, and that its adjusted EPS will improve to between $2.36 and $2.46 in 2016, up from $2.20 in 2015. Pfizer owes this bullish forecast to a group of fast-growing drugs, and its $17 billion acquisition of the specialty drug company Hospira.

Sales of the pneumonia vaccine Prevnar 13 grew 102% year over year, and that helped lift total Prevnar family revenue to $6.245 billion. Sales of its rheumatoid arthritis drug, Xeljanz, climbed 70%, to $523 million, and collaboration revenue, which includes sales of the anticoagulant Eliquis, jumped 65%, to $1.25 billion. Pfizer also notched $723 million in sales of Ibrance last year -- not bad for its first year on the market.

Additionally, Pfizer added more than $4 billion in annual sales when it completed its acquisition of Hospira last September.

Looking ahead
Pfizer has 16 programs in registration or phase 3 studies, and its mid-stage pipeline includes a host of intriguing trials that could boost sales someday. Among the most intriguing of Pfizer's late-stage programs are avelumab, a cancer drug targeting non-small cell lung cancer, bococizumab, a cholesterol fighting PCSK9 inhibitor, and the type 2 diabetes drug ertugliflozin, which is being co-developed with Merck & Co. (MRK 2.02%).

Pfizer also has an attractive late-stage pipeline of biosimilars that it got in the Hospira deal. That pipeline includes generic alternatives to multibillion dollar top sellers like Humira and Remicade, and puts Pfizer in a strong position to compete for market share in what it believes will be a $20 billion market by 2020.

The company's planned $160 billion merger with Botox-maker Allergan (AGN) offers up even more pipeline opportunity because Allergan has 20 specialty drugs in mid- or late-stage development, including depression and schizophrenia drugs that could also become blockbusters.

Overall, Pfizer's return to growth this year, and its pipeline opportunities, suggest to me that Pfizer is about to enter a multi-year period of top- and bottom-line growth. If so, then it might be time to consider picking up its shares in portfolios.

Todd Campbell has no position in any stocks mentioned. Todd owns E.B. Capital Markets, LLC. E.B. Capital's clients may have positions in the companies mentioned. The Motley Fool recommends Johnson & Johnson. Try any of our Foolish newsletter services free for 30 days. We Fools may not all hold the same opinions, but we all believe that considering a diverse range of insights makes us better investors. The Motley Fool has a disclosure policy.