Please ensure Javascript is enabled for purposes of website accessibility
Log In Help Join The Motley Fool
Free Article Join Over 1 Million Premium Members And Get More In-Depth Stock Guidance and Research
By Ashraf Eassa - Feb 9, 2016 at 8:30AM

This critical Apple supplier presented some interesting information about its current and future display development efforts.

One critically important aspect of Apple's (AAPL 1.62%) iPhone and, indeed, its entire product line is the display. Although display makers have a very tough time actually making money due to the high level of competition in the market (you won't see this Fool investing in an Apple display supplier anytime soon), the display is what the user looks at and interacts with.

Advancements in display technology are ultimately quite visible (pun completely intended) to the end user and, in my view, can be major upgrade drivers.

Apple's main iPhone display supplier, Japan Display (heretofore referred to by its common acronym, JDI), recently held a presentation discussing its current and future display technologies. Although much of the presentation isn't likely to be useful/interesting to investors, there were some key takeaways that I believe are worth sharing.

JDI is really championing LCDs, despite planning OLED mass production in 2018
There have been a number of press reports suggesting that Apple is planning to transition its iPhones away from LCDs toward a different technology known as OLEDs. Some of the advantages of OLEDs include the ability to be easily "curved" (e.g., Galaxy S6 Edge) as well as the fact that such displays can render "perfect" black levels (leading to effectively "infinite" contrast ratios).

In the presentation, JDI said that it will begin mass production of OLEDs in calendar year 2018. Given that Apple is expected to transition to OLEDs in the 2018 time frame, it's clear that JDI wants to fight to hang on to as many iPhone display orders as possible for those future iPhones in the face of very strong competition from Samsung (NASDAQOTH: SSNLF) Display and LG Display (LPL -0.36%).

However, even as the company says it will begin mass producing OLEDs in about two years' time, the company spent a lot of slides extolling the virtues of LCDs.

In particular, JDI spent a slide demonstrating the benefits of very high pixel per inch (i.e., high resolution) displays, arguing that there is actually value to producing smartphones with displays of up to 800 pixels per inch. 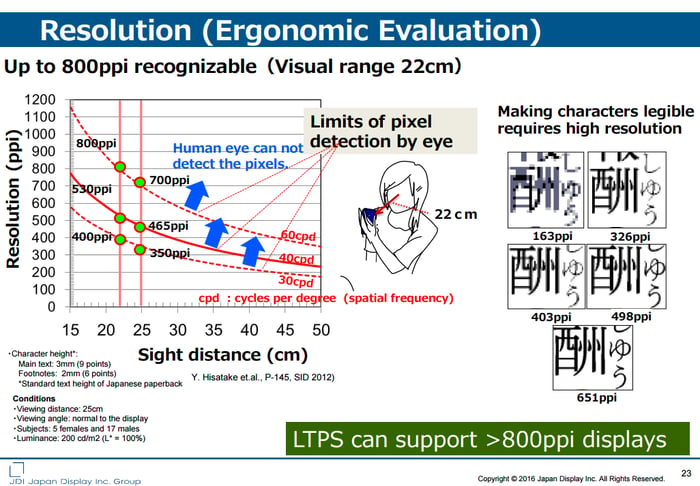 JDI was obviously setting the stage to promote the fact that it is developing 5.5-inch mobile displays touting a display resolution of 2160 by 3840, or an astounding 806 pixels per inch. According to the company, LCDs handle high pixel densities better than OLEDs do, are more reliable, cheaper, and are more conducive to "narrow border[s]." JDI's table here shows OLED in the lead for applications requiring that a display be "flexible."

What does this all mean for iPhone?
It is widely believed that Apple's next-generation iPhones will continue to use LCDs, with Digitimes reporting that JDI will be Apple's main display supplier for those phones. I suspect that JDI's focus on increasing display pixel density isn't just for show; major customers are likely interested in offering higher-resolution displays.

I don't think we'll see a 4K display on next-generation iPhone Plus models, but I would be highly surprised if we didn't see improvements in display resolution in both the iPhone 7 and 7 Plus over the iPhone 6s and 6s Plus, respectively.

Additionally, it has been two years since Apple launched the iPhone 6/6 Plus, so Apple and JDI have had about two years to collaborate on bringing some significant advances to next-generation iPhone-bound LCDs. I can't wait to see what they've cooked up for this fall.