The market dumped everything related to biotechnology, and Vertex got caught up in the storm.

What: Investors in Vertex Pharmaceuticals (VRTX 2.56%), a biotech focused on creating products that treat cystic fibrosis, had to swallow a bitter January. Shares shed 26% of their value during the month, according to data from S&P Global Market Intelligence.

So what: Despite the stock's drubbing, Vertex Pharmaceuticals did have some good news to share with investors during the month.

Now what: Anything related to the biotech sector took a major hit in January, so it's likely that Vertex's stock simple got caught up in the carnage. For example, the First Trust NYSE Arca Biotech ETF (FBT 0.94%), an ETF with an expense ratio of 0.58% that holds a collection of biotechnology stocks, also plunged in lockstep with Vertex's stock during the period, shedding more than 21% of its value. 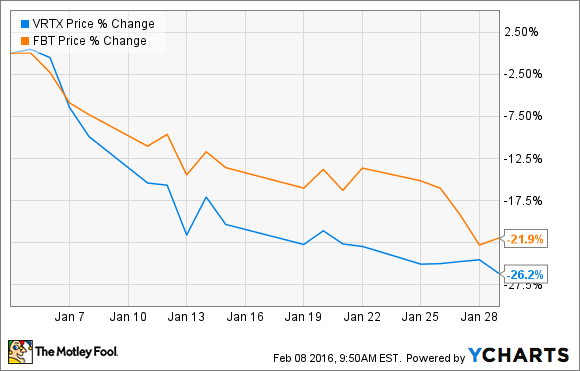 Looking ahead, I think there are plenty of reasons for Vertex's investors to be optimistic about its prospects for 2016 and beyond. Vertex currently has several trials underway that could continue to expand the addressable market for both Orkambi and Kalydeco, and also boasts a pipeline full of next-generation cystic fibrosis drugs. The company is also nicely profitable again and has more than $1 billion in cash on its balance sheet, so it is on sound financial footing.

Vertex's bulls should probably chalk up the poor monthly performance to the market being in a foul mood and refocus their attention on the company's rollout of Orkambi. If that continues to go well, then its share price will likely take care of itself.

Brian Feroldi has no position in any stocks mentioned. The Motley Fool recommends Vertex Pharmaceuticals. Try any of our Foolish newsletter services free for 30 days. We Fools may not all hold the same opinions, but we all believe that considering a diverse range of insights makes us better investors. The Motley Fool has a disclosure policy.