A close look at what analysts are expecting from Twitter's updated outlook on Wednesday.

The expectations
Here's what analysts are expecting for Twitter's first quarter and for the full year year.

First-quarter non-GAAP EPS, at the level of analyst expectations, would be up slightly from non-GAAP EPS of $0.07 in the year-ago quarter. And full-year 2016 non-GAAP EPS at this level represents about 57% year-over-year growth compared to expected full-year EPS for 2016, with analysts clearly expecting the company to benefit from some operating leverage as revenue grows during the year.

Given that Twitter reports its guidance in ranges, what guidance ranges would live up to these expectations?

When the company reports fourth-quarter results on Wednesday, investors are likely expecting Twitter to guide for first-quarter revenue and non-GAAP EPS ranges of approximately $620 million to $640 million, and $0.05 to $0.10. For the full year, investors are likely hoping for revenue and non-GAAP EPS guidance of $3 billion to $3.2 billion and $0.45 to $0.65, respectively. In other words, investors may be hoping the midpoint in Twitter's guidance ranges are in line with analyst expectations.

Expectations for the first quarter seem particularly conservative. Growing revenue just 44%, year over year in its first quarter would be a huge deceleration from the 58% year-over-year growth reported in the company's third quarter. However, the deceleration doesn't seem as sharp when compared to the 48% year-over-year revenue growth analysts are expecting for Twitter's fourth quarter.

In support of analysts' expectations, it's better to err on the side of conservatism in forward-looking projections. The consensus analyst estimates for Twitter's first quarter and the full year are reasonable, and should serve as a decent barometer for investors to judge the guidance Twitter provides on Wednesday against.

Whatever Twitter's guidance looks like for the current quarter and the full year, it's likely that the company's user growth for the quarter, along with any commentary on where Twitter expects user growth to trend during the year, could take precedence in directing sentiment for the stock when it reports results. With sequential user growth of just 1% in the company's monthly active users during the last quarter, and with CEO Jack Dorsey acknowledging the decelerating user growth has been disappointing, investors will likely put user growth at the forefront of any analysis when the company reports. 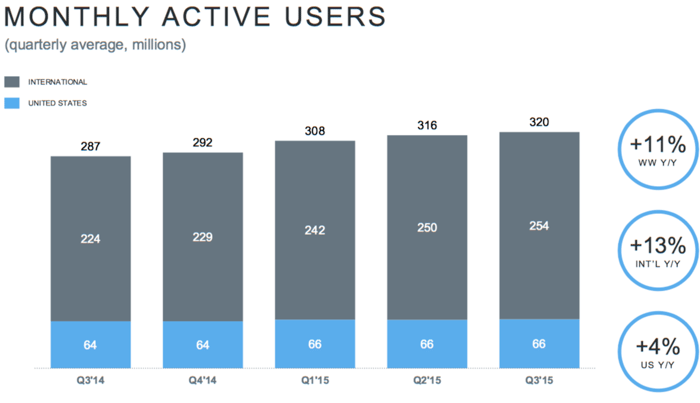 While Twitter's revenue may be able to grow in spite of user growth for some time, the social network will eventually need to prove to investors it can continue to grow its user base if the company wants to make the case that its business has plenty of growth potential.