What: Shares of online retailer Wayfair (NYSE:W) tumbled again on Tuesday, following an 15.6% slide on Monday. The ongoing sell-off of many fast-growing tech stocks and continued negative commentary from Citron Research appear to be the main drivers behind the stock's decline. At 2:30 p.m. ET Tuesday, Wayfair stock was down about 14%. Year to date, it is now down nearly 40%.

So what: In August, Citron Research published a report on Wayfair suggesting that its business model was seriously flawed. It criticized Wayfair's "asset-light" model and heavy advertising spending, and predicted that the company would never generate meaningful profits due to intense competition.

On Feb. 5, Citron tweeted that Wayfair had the worst business model on the Internet, putting a $5 price target on the stock. On Monday, Citron's Andrew Left made an appearance on Bloomberg TV, arguing that the stock would fall below $10 per share by the end of the year.

Now what: This negative commentary comes at a time of stock market turmoil, which is no doubt contributing to the slump in Wayfair's stock price. The shares tumbled following Citron's original report in August, but had mostly recovered by the end of the year. 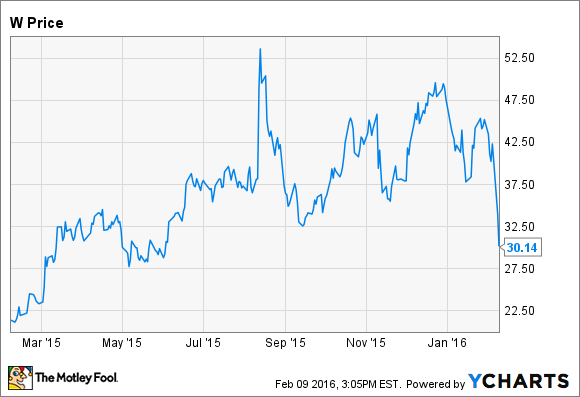 A company like Wayfair, which is growing very fast but generating major losses, is bound to be controversial. The stock declining is not, by itself, a sign that Citron is correct, but those bullish on the stock should thoroughly analyze the other side of the story.