Please ensure Javascript is enabled for purposes of website accessibility
Log In Help Join The Motley Fool
Free Article Join Over 1 Million Premium Members And Get More In-Depth Stock Guidance and Research
By Lee Samaha - Feb 10, 2016 at 10:03AM

Deere's financial services business is becoming increasingly important to its earnings, but near-term risk is rising.

Deere & Company (DE 4.49%) is a great business with good long-term prospects, but it's facing a significant amount of risk in its near-term prospects. Given that its upside potential is reliant on crop prices rising, it makes more sense to buy an ETF in a crop like corn or wheat than carry the near-term risk in Deere stock. Here's why. 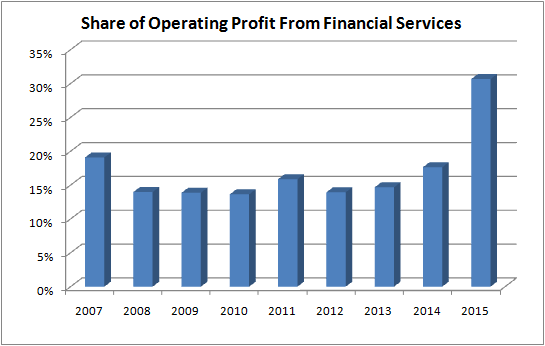 Simply put, Deere has become increasingly reliant on its financial services segment, and specifically on leasing out equipment. To be clear, Deere's management is on record stating that its financial company "has not been encouraging customers to utilize leases in general, or short-term leases specifically, through pricing or residual values." Rather, it's an option that has become more attractive to customers.

There are three major risks in this:

I will let the first point lie, because if you can accurately predict interest rate movements, then there is no need to waste time on equities! Nonetheless, it's an exposure that Deere has, given the reliance on its financial services. 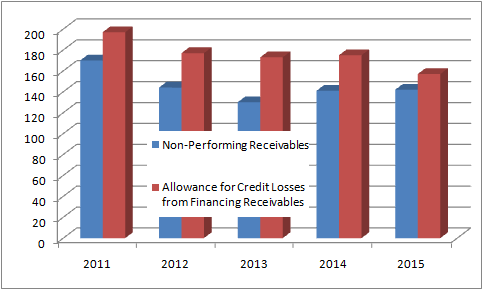 However, the pressure is building. Adding its nonperforming receivables to the total of its past-due receivables (generally whereby payments have not been made after 30 days or more) it's clear that there is a strong increase. If conditions in its end markets don't improve, then Deere may have to increase credit loss provisions. 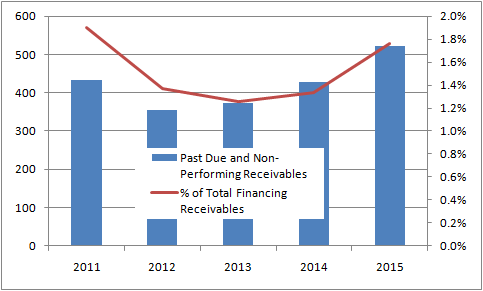 DATA SOURCE: DEERE & COMPANY SEC FILINGS. IN MILLIONS OF U.S. DOLLARS. PAST DUE = AFTER 30 DAYS OR MORE.

Leasing activity
Deere has been significantly increasing leasing activity. As noted above, Deere may not necessarily be encouraging it, but it's happening all the same, and Deere has been supporting it. A combination of low interest rates, declining farmer income, and an uncertain economic environment have come together to create conditions for its growth.

The chart below shows that the growth in equipment on operating leases has significantly increased in recent years -- note that it wasn't a significant factor back in the last trough in 2009. 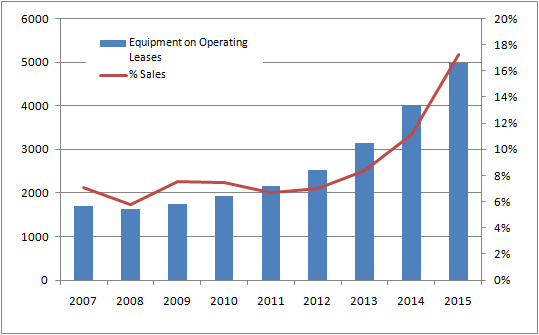 So far, pricing in the industry has held up well, with AGCO and CNH recently releasing results warmly received by the market; Deere also has an assumption of a 2% price increase baked into its first-quarter and full-year guidance. The question is: How long will it last?

Two bottom lines, and a caveat
All told, Deere's financial services segment has a lot of near-term risk facing it, but investors shouldn't lose sight of the fact that if crop prices increase -- perhaps due to unfavorable growing conditions caused by, say, a La Nina following on from this year's strong El Nino -- then nearly all Deere's metrics are likely to turn around positively.

Still, that doesn't build a case for buying the stock. The company is still a great long-term business, but if you are buying in the expectation of a pickup in crop prices, then simply investing in a corn or wheat ETF like Teucrium Corn Fund or Teucrium Wheat Fund makes more sense than carrying the near-term risk in Deere's financial services segment.