Please ensure Javascript is enabled for purposes of website accessibility
Log In Help Join The Motley Fool
Free Article Join Over 1 Million Premium Members And Get More In-Depth Stock Guidance and Research
By Tyler Crowe - Feb 10, 2016 at 9:15AM

Continued pressure on oil prices and, by default, rig companies sent shares of Rowan plummeting in January, but a suspension of the dividend actually gave shares a bump.

What: Shares of Rowan Companies (RDC) declined by 25% in January mostly because of weakness across the oil and gas sector. The company did announce it was suspending its dividend on Jan. 29, but that actually helped give shares a little boost to end the month.

So what: For Rowan and its rig company peers, the hits just seem to keep on coming. Continued low oil prices have sapped most producers of cash flow, and most of them don't have any incentive to go out and explore or drill for new reservoirs right now. So as Rowan's rigs roll off contract, they are finding themselves without work. This hits it a little harder than most rig companies because the majority of its fleet are jackup rigs, which typically work on shorter contracts than floating rigs.

According to Rowan's most recent rig status report, six of its jackup rigs are expected to roll off contract by the end of 2016, and based on statements from oil executives recently, there isn't a whole lot of confidence that a producer will be itching to sign these rigs up for more work.

Normally, when a company suspends or cuts its dividend, investors go running for the hills. In his case, though, we saw shares jump following the news that Rowan was eliminating its dividend. Much of that has to do with the fact that the market had pretty much priced in a dividend cut or suspension anyway. After all, pretty much all of Rowan's peers had already done the same. 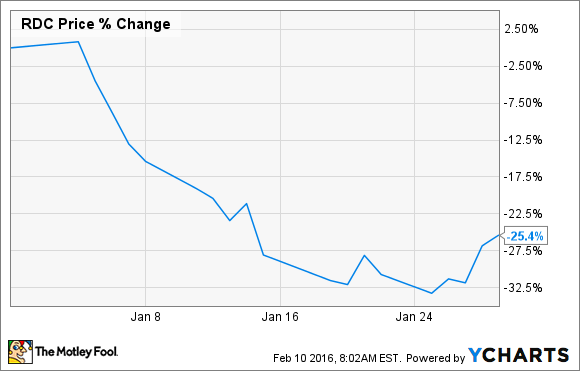 Now what: One thing that Rowan has going for it is that the few floating rigs that it owns have contracts that go well into 2017. So it will be able to ride out most of the year with a decent revenue base. Also, by suspending its dividend, it will be able to save about $50 million annually to fill any funding gaps. Beyond that, though, things could get hairy if oil and gas producers still aren't ready to open up their wallets and spend on new offshore drilling operations.

Shares of These 2 Offshore Oil Stocks Got Hammered in December

Is It Time to Buy These Offshore Oil and Gas Drilling Stocks?

Offshore Drilling: These Rig Companies Could Be Takeover Candidates